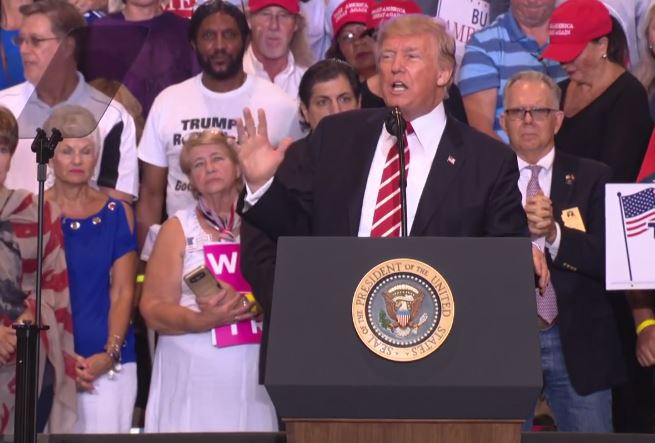 President Donald Trump held a rally in Phoenix Tuesday night in which he appeared to promise to pardon Joe Arpaio, the disgraced sheriff of Maricopa County, Arizona. Trump told his declining core of supporters “I’ll make a prediction: I think he’s going to be just fine, OK? But I won’t do it tonight because I don’t want to cause any controversy.” In a mocking tone, Trump asked “Was Sheriff Joe convicted for doing his job?”  Arpaio was convicted of criminal contempt of court for continuing to racially profile Latinos after he was order to desist by a Federal court.

Sheriff Apaio has become a symbol for white nationalists of the path forward towards preventing the United States becoming a mixed-race country. The Alt-Right has lionized the criminal sheriff.

Trump also repeated his pledge to build The Wall, upping the ante by implying that he will close down the Federal government in order to get his way. Trump told his howling audience that The Wall is “absolutely necessary” and said; “Believe me, if we have to close down our government, we’re building that wall.” He also claimed that stepped up ICE raids were “liberating towns out on Long Island.”