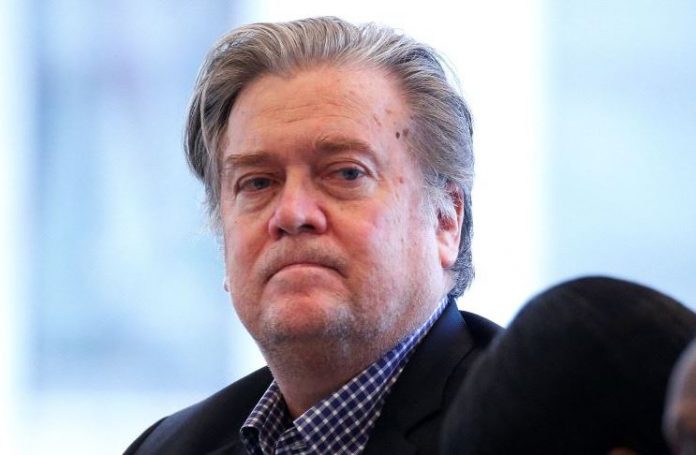 As you probably already heard, Steve Bannon will be incoming President Donald Trump’s chief strategist. Although normally the White House Chief of Staff is the highest officer in an administration, Trump announced that Bannon will be co-equal with the newly named Chief of Staff Reince Priebus.

Bannon is a hard-line anti-immigrant activist who has been a leader in dissemination of Alt-Right racist and Anti-Semitic propaganda as head of Breitbart News. Yesterday, the Anti-Defamation League (ADL) issued a statement on Bannon saying:

the ADL strongly opposes the appointment of Steve Bannon as senior adviser and chief strategist in the White House,” said the statement posted on Twitter by ADL CEO Jonathan Greenblatt. “It is a sad day when a man who presided over the premier website of the ‘alt-right’ – a loose-knit group of white nationalists and unabashed anti-Semites and racists – is slated to be a senior staff member in the ‘people’s house.’

When demonstrations erupted around the country, Trump denounced marchers as “professional protesters,” without any evidence that they were being paid to march. Similarly, Bannon has accused pro-immigrant institutions of not caring about immigrants, but only about their own self-interest. In March, for example, he said that the Catholic Church’s defense of immigrants was not based on its moral teachings. In March he said that:

“I understand why Catholics want as many Hispanics in this country as possible, because the church is dying in this country, right? If it was not for the Hispanics…I get that, right?”

Bannon also denounced Paul Ryan for not defunding the DACA program for young immigrants in terms extremely disdainful of the Catholic Church. “Paul Ryan is a Catholic in good standing. He’s rubbing his social-justice Catholicism in my nose every second,” he said in a radio interview.

According to the Southern Poverty Law Center, the racist right is ecstatic over the selection of Bannon to be Trump’s top aide. In a statement over the weekend, the SPLC said that:

In July, Bannon boasted that Breitbart News was ‘the platform for the alt-right.’ The alt-right, as we know, is simply a rebranding of white nationalism and is the energy behind the avalanche of racist and anti-Semitic harassment that plagued social media platforms for the entire presidential campaign. Once the news of Bannon’s appointment hit white supremacist websites last night, forums like Stormfront erupted in celebration.

In spite of what you may be hearing from wishful thinking pundits, Trump is not softening his line. The appointment of Bannon to the top position in the White House is confirmation that anyone who supports immigrant rights has something to fear from the new administration. Keep on protesting, calling Congress, and organizing. We have a four-year fight on our hands and it has already begun.