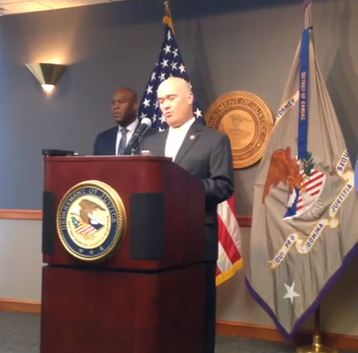 Three right-wing militiamen were arrested in a plot to murder Muslim immigrants in Garden City, Kansas. The men planned to detonate explosives in a post-election attack on an apartment that houses many Somali refugees. The men, all in their late 40s, are members of a Kansas militia group called the Crusaders which advocates violence against immigrants and Muslims.

“These individuals had desire, the means and the capability and were committed to carrying out this act of domestic terrorism,” Eric Jackson, of the FBI, told the Topeka Journal. The group had been planning the attack since early in the year. A confidential informant infiltrated the organization and provided evidence of the plot. According to the FBI, the Crusaders had conducted surveillance of Muslim immigrants and their institutions and had met repeatedly to select a target and plan the attack.

The target was an apartment housing 120 refugees.

One of the accused terrorists, Patrick Stein, said that “the only good Muslim is a dead Muslim,” according to the FBI. Stein reportedly said; “When we go on operations, there’s no leaving anyone behind, even if it’s a one-year-old, I’m serious. I guarantee, if I go on a mission, those little f**kers are going bye-bye.”

The men discussed attacking churches that assisted the refugees and landlords that rented to them. Stein harassed Muslims, and according to the FBI, he “yelled at Somali women dressed in traditional garb, calling them ‘f*cking raghead bitches,'” and called the refugees “cockroaches.”

The men wanted to delay the terrorist attack until after the election, when they would send a “wake-up” call to Americans. Stein explained that; “The only f**king way this country’s ever going to get turned around is it will be a bloodbath and it will be a nasty, messy motherf*cker. Unless a lot more people in this country wake up and smell the f*cking coffee and decide they want this country back … we might be too late, if they do wake up … I think we can get it done. But it ain’t going to be nothing nice about it.”

An FBI spokesman said that the men were part of a subculture of hate and violence. They intended to park four explosive-laden trucks at the four corners of the apartment building and then detonating them.

The men discussed killing Americans who assisted the refugees. Curtis Allen, one of the terrorists, said that signs should be made that said “I SUPPORT ILLEGAL IMMIGRATION, I GO AGAINST THE CONSTITUTION ON A DAILY BASIS, I DO NOT HAVE ANY CARE FOR MY FELLOW CITIZENS IN THE STATE OR IN THE TOWN THAT I REPRESENT…and then for every one of them that we blow the top of their head off we just put that around their neck.”