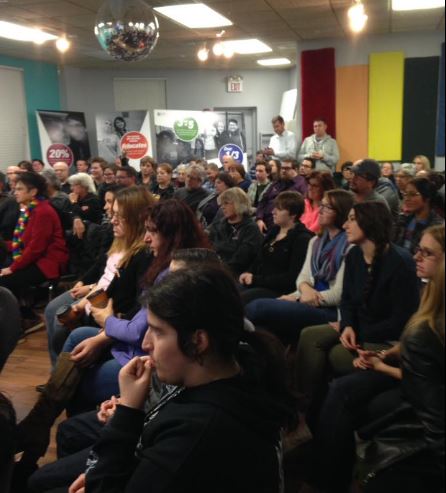 I went to the Center in Bayshore tonight for a meeting of the Long Island LGBT Network reacting to the election of Donald Trump.

The large meeting hall was packed to the walls and more people stood in the lobby. There was a lot of emotion in the room. Several people said that their family members had voted for Trump even though they knew that it put the advances the country has made in respect for the rights of the LGBT community in danger. They felt betrayed by people whom they loved.

David Kilmnick, the director of the network, stressed the importance of his community working to defend itself and other endangered groups like immigrants.

I spoke to the meeting about Donald Trump’s promise to eliminate the provision of our immigration law that allows individuals persecuted on account of their sexual orientation or gender identity to apply for asylum. Sexual minorities are among the most persecuted social groups in a number of countries and LGBT refugees face torture and death in their homelands. This provision of the asylum law has been a target of religious conservatives for years. Trump also appears to favor rolling back the recognition of same-sex marriages as a basis family immigration.

Folks at the meeting expressed concern that Trump’s open bigotry emboldens closet racists and homophobes to come forward and vent their prejudices on the groups the incoming president targets for derision. They fear that the gains that have been made over the last half-century will be under attack for the next four years.

At a time of great peril for many communities, it is vital that immigrants work together with the LGBT and other targeted communities. If we don’t stand together, we will fall separately.