When word leaked yesterday that the Trump administration was planning on reducing the number of refugees admitted next year to zero, the New York Immigration Coalition and its members organized a press conference to denounce the plan. 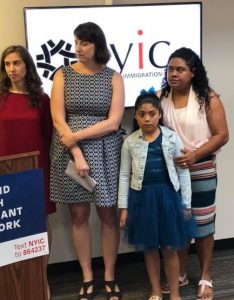 Refugee admissions only occur after extensive background checks and months or even years of vetting. During previous administrations, the number of refugees admitted each year hovered between 50,000 and 100,000. This year a maximum of 30,000 refugees were allowed to enter. Reducing refugee admissions to zero or near-zero is unprecedented in the modern era.

“It is an unfortunate occassion that we are gathered here today for,” said Steve Choi the President of the New York Immigration Coalition, adding “We are very disturbed by the Trump plan to zero-out refugee admissions. This is politics pure and simple.” He added that, “This is a direct rejection of the 200 year-old tradition of welcoming refugees. When we have welcomed refugees, we have prospered.” Choi said that the elimination of the Refugee program was a naked political ploy designed to fire up Trump’s base for the 2020 election. 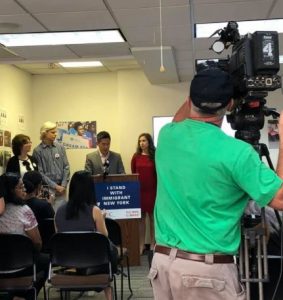 Avigail Ziv, the Executive Director of the International Rescue Committee’s New York office, heads one of the largest and most long-standing refugee resettlement organizations. She said that “I come to this work because it is personal. My father was a refugee. Reports that the United States is considering admitting no refugees in 2020 would be a catastrophic decision by this administration for many of the world’s most vulnerable.” She warned that there would be foreign policy consequences for zeroing out refugee admissions; “Ending the Refugee program would irreparably harm America’s credibility and influence.”

Alla Shagalova, the Director of HIAS New York, is herself a refugee. She said that; “my family came during a Republican administration.  This was not unusual. Until now, refugee resettlement has never been a political issue. The United States had been a symbol of freedom and compassion.”

Refugee resettlement has revitalized declining urban centers in Upstate New York, said Fiscal Policy Institute (FPI) economist David Kalick. “We are good at resettling refugees and it makes us stronger too.” He worried that cities like Buffalo and Utica would suffer further declines if the flow of refugees ended.