A new study from the ADL says that Alt-Right online activists are responsible for Twitter attacks on Jewish journalist. Increasing antisemitism on the internet is a growing problem. Here are the major findings of the study: 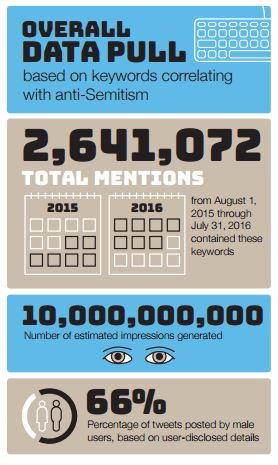 • Based on a broad set of keywords (and keyword combinations) designed by ADL to capture anti-Semitic language, there were 2.6 million tweets containing language frequently found in antiSemitic speech between August 2015 – July 2016.

• These tweets had an estimated 10 billion impressions (reach), which may contribute to reinforcing and normalizing antiSemitic language on a massive scale.

• There was a significant uptick in anti-Semitic tweets in the second half (January-July 2016) of this study period. This correlates to intensifying coverage of the presidential campaign, the candidates and their positions on a range of issues.

• The words most frequently used in anti-Semitic tweets directed at journalists included “kike,” “Israel,” “Zionist,” and “white” etc., an indication that the harassment may have been prompted by the perceived religious identity of the journalist. overall data pull based on keywords correlating with anti-Semitism 2,641,072 2015 2016 Total mentions from August 1, 2015 through July 31, 2016 contained these keywords Percentage of tweets posted by male users, based on user-disclosed details 66% 10,000,000,000 Number of estimated impressions generated 2

• As previously stated, there is no evidence suggesting these attacks were explicitly encouraged by any campaign or candidate. In fact, ADL has been able to identify individuals and websites in the white supremacist world that have played a role in encouraging these attacks.

• While this report did not investigate whether social media attacks have a chilling effect on journalists, it does show that targeted anti-Semitic tweets raised the cost of entry into (and staying in) the marketplace of ideas for journalists, particularly Jewish journalists.