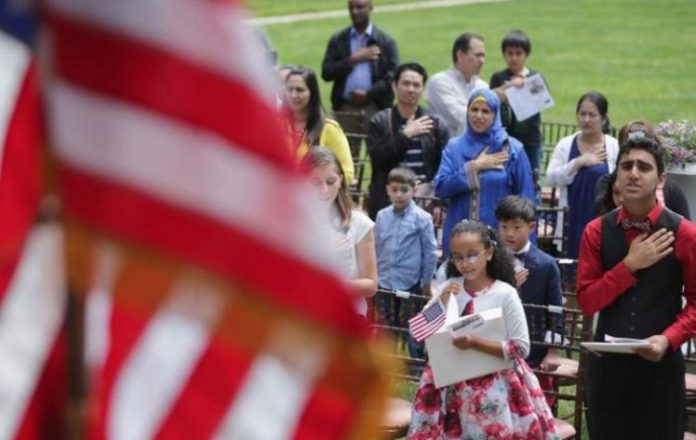 Immigration 101 is a series based on my course on immigration law at Hofstra Law School.

When I do public speaking, it is not unusual for me to hear these sorts of remarks from the audience:

“My friend Jose has been legal for two years and he still hasn’t become a citizen.”

“I wouldn’t be so against the illegals if they would just take the step of becoming citizens.”

“Today you don’t even have to know English to become a citizen.”

You may have heard these things said yourself. Or you may have said them. In any event, most of us don’t really think of what it takes to become a citizen, except in the context of immigration.

That is a bit strange since 90% of U.S. citizens got that status by being born here. Folks born in the U.S. get what some call “birthright” citizenship. Now there are some Republicans who want to get rid of that, but I’ll address their concerns later. To get citizenship at birth you don’t have to know English or pass a test on the structure of the United States government. You don’t have to promise to serve in the military if drafted or swear you were never a communist. No oath of allegiance either. Just get yourself born in Mineola or Miami and you’re an American.

For immigrants, however, the task of becoming an American is quite a bit rougher. In this blog I’ll look at the basics, but in subsequent entries I’ll go a bit deeper. Suffice to say, there is a lot of paperwork, security checks, and other bureaucratic stuff.

The first requirement to be a U.S. citizen is that an immigrant must first be a “Lawful Permanent Resident” (LPR), also known as a “green-card holder”. This is, for many folks, the single most difficult requirement. I have often had well-meaning Americans call me to tell me that their Salvadoran friend should apply for citizenship because “he’s been legal for seven years, speaks good English, has never been in trouble with the police, and is a great guy.”

OK,  I ask, but is he a Lawful Permanent Resident? Typical response is “I said he’s legal.”

That is not enough. There are millions of foreign-born people in the United States living here with valid legal documents who are not LPRs. They may be here on work visas, or have Temporary Protected Status. They may have lived here legally for years and paid taxes. But, sorry, these statuses are not the “first step towards citizenship” as many Americans wrongly believe. The only true “first step” is Lawful Permanent Residence.

And just being a Lawful Permanent Resident isn’t enough, either. Generally you must be an LPR for five years before your application for citizenship can be granted. Time spent legally in the U.S. before becoming an LPR generally does not count towards the five year requirement.

I have many Salvadoran clients who first got legal status in 1991. They have been living and working legally in the U.S. ever since. When they were finally able to obtain Lawful Permanent Resident status a few years ago, none of the time they had lived legally in the United States previously counted towards the five year residence requirement!

Now there are a few groups of Lawful Permanent Residents who don’t have to wait five years to become citizens. The two biggest groups are spouses of U.S. citizens and members of the military. Their waits are substantially less.

Know Your Rights When Traveling In and Out of the U.S.