The program supposedly targets high-level criminal offenders, but the reality is far different.

From January 1 to March 31 in New York State, 70 percent of immigrants transferred into the custody of Immigration and Customs Enforcement (ICE) from the criminal justice system and more than 80 percent of immigrants deported through Secure Communities had not been convicted of a crime, according to a press release by the New York State Civil Liberties Union. The release analyzes federal data about the program.

In the graphic below, L1, L2, and L3 connote Level 1, 2, or 3 criminal offenders, with Level 1 representing the lowest-level offender. 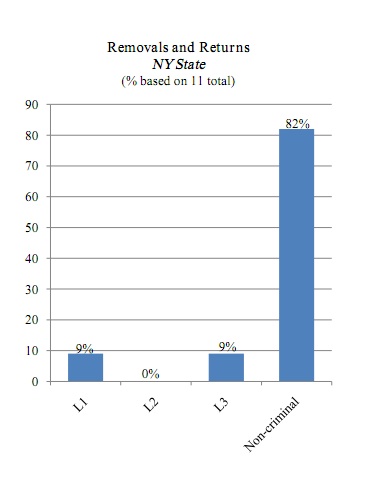 In June 2010, Long Island Wins broke the news that New York State had entered an agreement to adopt Secure Communities. At that time, I spoke to a representative from Immigration and Customs Enforcement (ICE) who described the program in contradictory language that, as it turns out, reflected the ever-changing opt in/opt out policies of the program.

Here’s an excerpt from my June 2010 blog post on Secure Communities coming to New York:

The agreement between New York State and the immigration agency states that those charged with a crime, but not convicted, could be deported under the program. According to the dictates of the agreement, whether a person is actually guilty or innocent of a charged crime is not relevant.

I requested that Ort clarify that claim in regards to what is stated in the agreement, but I’m still awaiting his response.

I never received a response, but I guess the widespread confusion about the program more or less serves as an explanation.