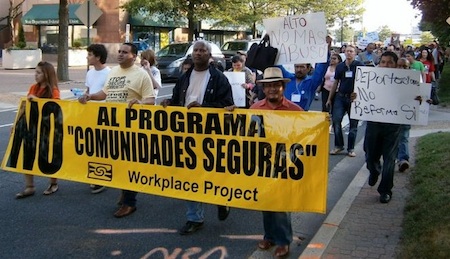 As our blogger Pat Young wrote earlier today, Governor Cuomo had been pressured by immigrant rights activists for months before suspending the Secure Communities immigration enforcement program yesterday. One of those groups was The Workplace Project, which fights for immigrant worker rights and is based in Hempstead.

Here’s a press release from Omar Angel-Pérez, the director of The Workplace Project and a Long Island Wins steering committee member:

Wednesday, June 1st. Hempstead, NY—Workplace Project, member of New York Working Group Against Deportation, applauds Governor Cuomo’s decision today to suspend New York State’s participation in the “Secure Communities” program in all counties in New York, including Nassau and Suffolk those where it had already been implemented. This mass deportation program was introduced in New York without any public input or notice. But it has come under fire for not meeting its goals while eroding civil liberties and discouraging cooperation between immigrants and police officers.

Just over a month ago, over three dozen organizations in New York counties where S-Comm was activated sent a letter to Governor Cuomo, calling for an end to the program statewide as it fuels racial profiling and anti-immigrant sentiment.

“We applaud Governor Cuomo’s decision to suspend the Secure Communities Program. In Long Island, Secure Communities was implemented without any consultation or opportunity for community input. This flawed program was deepening the climate of fear for immigrants in Long Island. With this decision, Governor Cuomo has shown his commitment to keep our communities truly safe and secure,” said Omar Angel Pérez, Executive Director of Workplace Project.

Governor Cuomo’s action today is a victory for the people of New York, especially immigrants and people of color. It represents the culmination of organizing efforts by advocates across the state, working together with elected officials and law enforcement to end participation in a program that undermined community policing and created a climate of fear and terror among immigrant families.

We are proud of Governor Cuomo for taking this bold step. With his action, Governor Cuomo continues New York’s great legacy of being a welcoming state for immigrants and a strong supporter of civil rights for all.

A copy of the Governor Cuomo’s letter to DHS can be found here.