Governor Cuomo’s decision to suspend participation in the Secure Communities immigration enforcement program comes at the end of a long campaign by the immigrant rights community to reverse the decision of his predecessor, Governor Paterson, to join it.

When a state enters into an agreement with the Department of Homeland Security to participate in Secure Communties, all police departments within the state are required to share fingerprint data on all arrestees with U.S. Immigration and Customs Enforcement (ICE). While the program was originally sold to Congress as a way to identify and deport dangerous criminals, in fact, most of the fingerprints turned over to immigration authorities came from persons accused of minor crimes, many of whom were never convicted of anything. Immigrants caught up in the deportation process included victims of domestic violence and people with minor traffic violations.

Immigrant organizations in New York saw that Secure Communities was eroding the trust built up between police and immigrant communities. A trip to the police station increasingly became identified with deportation and police were coming to be seen as immigration agents. In some jurisdictions, police were accused of racially profiling immigrants for traffic stops to facilitate deportations of non-criminals.

After hearing from a fired consultant working on the implementation of the program, we now know that New York State itself was deceived when it entered into its memorandum of understanding with Homeland Security to join Secure Communities.

Originally, Immigration and Customs Enforcement spokespeople assured the state that local police forces could opt out of the program. By last fall, however, ICE said that once a state had joined Secure Communities, all local police also had to join. The former head of the Immigration Subcommittee of the House of Representatives, Zoe Lofgren, said that not only was New York deceived by ICE, but that Congress was lied to on this matter, as well.

Immigrant groups had approached Gov. Paterson last year to rescind Secure Communities, but the lame duck governor was unwilling to do anything to help. We put the issue on the agenda of Andrew Cuomo’s transition team right after the election and in January and February exerted backroom pressure on him to drop out. 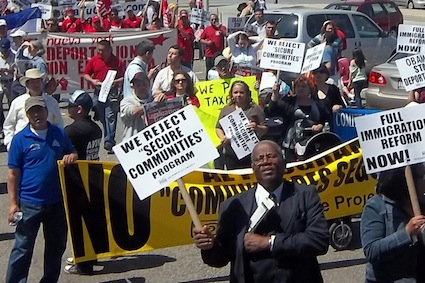 At the beginning of March, I had the opportunity to meet with the new Cuomo administration as part of a delegation from the New York Immigration Coalition to ask for rescission of the agreement to join Secure Communities. Cuomo’s people were way ahead of us. The governor’s deputies were already looking into the legalities of pulling out. In trips around the state, they had heard repeatedly that the program was damaging public safety and that its provisions had been misrepresented by ICE officials.

Throughout the last three months there has been a swelling call by elected officials, law enforcement, and community and religious groups for New York to suspend Secure Communities here. Prayer vigils, demonstrations, petition drives, and call-in days have effectively kept the issue on the front burner. Your participation in our campaign was vital in making sure that the good intentions of the governor were matched by action.

With New York and Illinois pulling out of the program, the Department of Homeland Security has announced that it will review the program nationally. Cuomo’s decisive act may improve the lives of immigrants throughout the country.