The drumbeat of criticism about the Obama administration’s so-called “Secure Communities” program continues, as more cities and states push back against its dragnet approach and insist on local control over police priorities. As we’ve noted before, the ramifications of S-Comm are often erily similar to the ramifications of Arizona’s SB 1070. It allows police wide latitude to question the immigration status of people they come into contact with, leading to racial profiling and damaging community trust.

In New York, a broad coalition of advocates and elected officials are speaking out. Via press release from Make the Road New York:

“In the wake of the Supreme Court’s decision in Arizona v United States, dozens of localities across the country are standing up against damaging immigration programs that connect local authorities with Immigration and Customs Enforcement. Specifically, an increasing number of cities and states are pushing back against the Secure Communities program, and promoting programs that restore trust between law enforcement and immigrant communities.

In New York, where the Secure Communities program took effect on May 15th, immigrant leaders, advocates, and elected officials joined together to denounce it’s damaging effects. Together, they pledged to continue to work to end the program, and to send a message to elected officials across the country in November about the community’s opposition to immigration policies that hurt our families.

State Senator Gustavo Rivera said, “When Governor Cuomo suspended ‘Secure Communities’ in New York, police and local leaders hoped that our communities’ safety could begin to be restored. If individuals are afraid to approach law enforcement, our communities become less safe and we all suffer. This dangerous program once again threatens to violate the rights of all immigrants and threatens the ability of law enforcement to keep us safe. ‘Secure Communities’ has no place in New York State and should be seen as a threat to the safety of all New Yorkers.”” 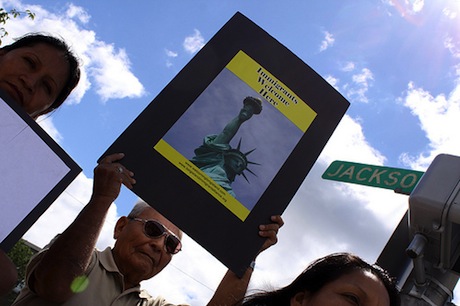 In California, the state legislature, working with the National Day Laborer Organizing Network (NDLON), is exerting a measure of local control by moving ahead with the TRUST Act, which would ensure police only send immigrants who have serious convictions to ICE for deportation. In an editorial endorsing California’s TRUST Act, the Los Angeles Timesexplains what Secure Communities is really doing:

“For nearly three years, the Obama administration has advertised the Secure Communities program as a targeted enforcement tool that identifies “dangerous criminal aliens” for deportation. Over and over, federal officials have insisted that the program’s focus would be chiefly limited to those immigrants whose criminal convictions show that they pose a danger to public safety.

But that’s not the case. In practice, Secure Communities is a dragnet that fails to distinguish between felons convicted of serious crimes and nonviolent arrestees facing civil immigration violations. In California alone, more than half of the 75,000 people deported under the program since it began in 2009 had no criminal history or had only misdemeanor convictions.”

And the District of Columbia’s city council once again took action to rein in the program earlier this week:

“In a unanimous vote, the D.C. Council approved a bill that will limit the ability of the federal government to enforce immigration laws by restricting the circumstances in which individuals can be held in the custody of local law enforcement at the request of the Immigration and Customs Enforcement. The nation’s capital joined a handful of cities across the country that are taking a stand against the spate of immigration enforcement measures seen in states like Arizona, where local police are now required to ask people who they suspect of being in the country illegally for their documents, during actions as routine as traffic stops.

“We want to be the anti-Arizona,” Sarahi Uribe, a D.C.-based organizer for the National Day Laborer Organizing Network, told The Huffington Post. “Our entire campaign to get cities to break ties with federal immigration enforcement is an effort to be the opposite of Arizona.””

The former district attorney for Manhattan, Robert Morganthau, laid out the failings of Secure Communities while applauding the recent move by Chicago Mayor Rahm Emanuel supporting legislation to address problems caused in his city by the federal program:

“Secure Communities calls on local officials to provide information on arrestees who might be subject to federal immigration holds, called “detainers.” But on Tuesday, Chicago Mayor Rahm Emanuel supported an ordinance prohibiting local law enforcement from turning over to federal authorities immigrants who had no serious criminal records or outstanding warrants. In doing so he joined a growing list of state and local officials—including the governors of New York and Massachusetts—who are seeking to “opt out” of the program.

Why opt out? After all, on its face, Secure Communities—whose stated aim was to focus removal efforts on serious criminals—seemed like a program anyone could support.

Unfortunately, that mission statement had little to do with reality.

The reality was that the federal government collected information on enormous numbers of foreign-born U.S. residents, many of whom were here legally, and many of whom had not been, and never would be, convicted of a crime.

These leaders are doing the right thing in speaking up and trying to rein in this failed program. Policies that encourage, excuse, or allow racial profiling should not be promoted by anyone – not state and local police forces, and not the federal government. 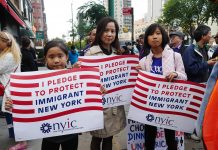 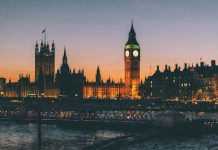