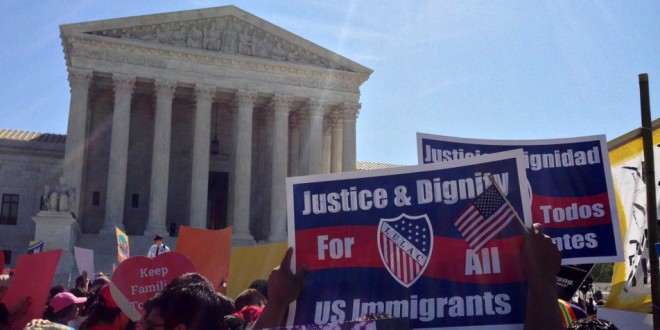 Executive orders DAPA/DACA+ could be back in the Supreme Court. The Obama administration has filed a petition for the court to rehear the case.

That decision was a 4 to 4 tie that left in place an injunction by the lower court blocking the implementation of the DAPA and DACA+ executive action programs. It was a non-precedential decision that decided nothing.

In the filing on Monday, Acting Solicitor General, Ian Gershengorn, said that it is “very rare” that requests for rehearing are granted, however, such requests have been granted in the past when Court vacancies led to tie votes. The Court has been short one Justice since the death of Antonin Scalia because conservatives have blocked confirmation hearings on Obama nominee Garland Merrick.

According to the filing by the Obama administration, the case involves issues of “great national importance” that should not be left to a lower court to decide. While the Supreme Court could order a new hearing on the case after a final decision is made in the Federal District Court and appeals in the Fifth Circuit Court of Appeals have been exhausted, the administration says that the case should be heard now because the preliminary decisions by those two courts indicate that their ultimate decisions will not be changed by evidence introduced at a trial.

According to the filing, “the justification that might be advanced in other cases for awaiting an appeal from a final judgement down the road have little force here, because the court of appeal’s rulings leave little or no room for a different outcome below.”

While I had assumed that the Supreme Court would not be in a position to rehear the issues in this case until 2018, this petition, if granted, could lead to a decision next year.

The Obama administration’s filing can be found HERE.