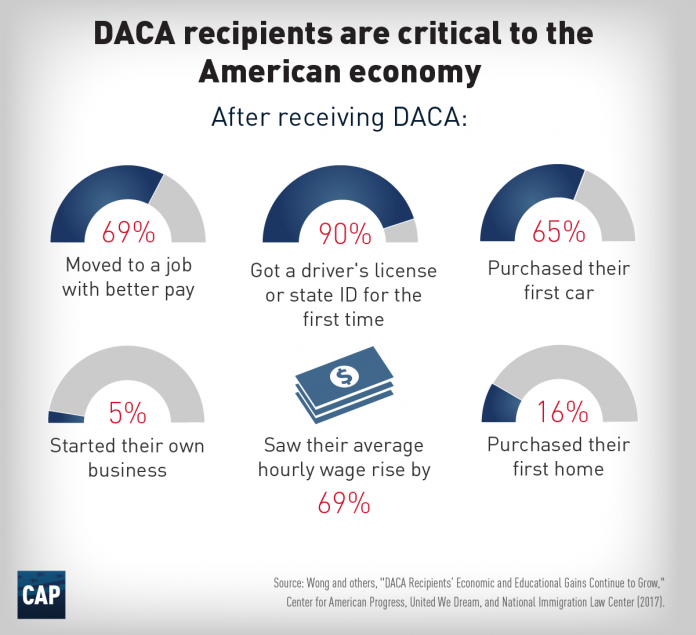 What does the rescinding of DACA mean?

Recipients’ existing DACA will still be valid until the expiration date. This information can be found on the I-795 Approval Notice and at the bottom of one’s Employment Authorization Document.

U.S. Citizenship and Immigration Services will also no longer accept requests for advanced parole, which had allowed DACA recipients to leave and re-enter the United States.

And, though Sept. 5 was President Donald Trump’s stated “deadline,” he merely gave in to the ultimatum issued by 10 state attorneys general in a nefarious collaboration that has now thrown 800,000 young Americans into a haze of uncertainty and fear.

The attorneys general, including Texas’ Ken Paxton, threatened to sue the Trump administration if DACA was not rescinded by Sept. 5, calling the program unconstitutional.

However, 20 Democratic attorneys general, including California’s Xavier Becerra, have affirmed that DACA is indeed constitutionally sound and matches up with a president’s exercise of prosecutorial discretion.

It is also important to note that DACA recipients are active, contributing members of this nation who have lived here for at least 10 years. According to the Brookings Institute, 69 percent of them were 10 years old or younger when they arrived, meaning that this is now their true home.

As motivated hard workers, 91 percent of DACA recipients are legally employed and pay taxes, while 72 percent of the top 25 Fortune 500 companies employ those with DACA, including Apple and Amazon, according to a recent survey administered by Tom Wong, a professor at the University of California, San Diego.

Once they receive DACA, 65 percent of recipients said they were able to pursue educational opportunities previously closed off to them.

The survey also found that 90 percent of recipients were able to get a driver’s license or state identification for the first time, while 48 percent became organ donors.

The contributions of DACA recipients clearly show they are eager to help grow their communities and the nation at-large. However, once their DACAs expire, they will be subject to deportation by U.S. Customs and Immigration Enforcement.

It is now up to Congress to act and turn DACA into a law, whether its part of a larger immigration reform package or stand-alone.