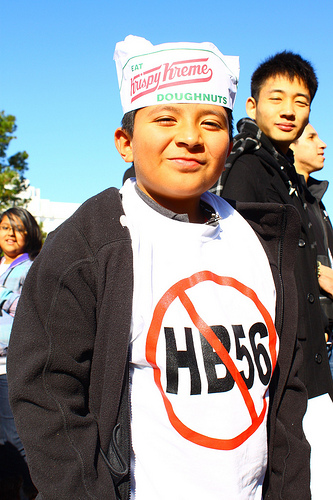 When Alabama lawmakers passed HB 56 last year – the state’s version of Arizona’s “Show Me Your Papers” law – many Latino students stopped coming to school and farms were left without workers. As a result,  backers of the measure said they would tweak the bill to get rid of some of its most hideous parts.

In an editorial today, The New York Times refers to the new version of the bill as “Alabama’s Disgrace”:

“House Bill 658 preserves the malign intent of the earlier law and makes some of its provisions worse. It expands the “papers, please” requirement to target passengers in a stopped car as well as the driver. It doubles, to 48 hours, the time someone can be jailed while awaiting an immigration check. It increases jail time and fines for newly created — and surely unconstitutional — state immigration crimes. It does nothing meaningful to shield from prosecution those who “harbor” or “transport” immigrants for religious or humanitarian reasons. As for the expense of litigation, the harm to public safety as crime victims avoid the police, and the misery inflicted on the working poor — all of those ill-effects seem quite intact.”

The Supreme Court will soon rule on Arizona’s immigration law, deciding whether these types of laws are even remotely constitutional. If they find that states can make their own immigration laws, expect to see the worst round of racist legislation since the days of Jim Crow.