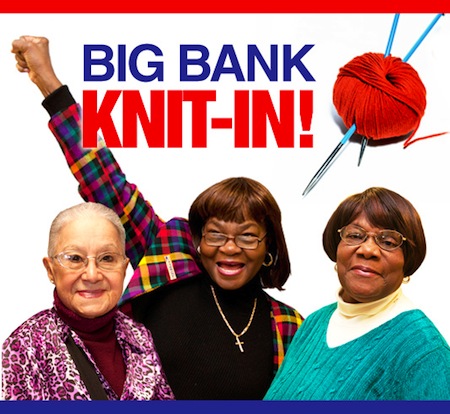 President Obama and Senate leaders were able to avert a potential US credit default a few days ago, but the agreement that they reached could result in cuts to programs vital to seniors, students, and families.

One group, United NY, thinks that instead of slashing funds to programs like Medicare and increasing student loan interest rates, banks should be helping balance the budget. Along with a coalition of other groups, United NY is holding several knit-ins today in New York City and on Long Island (you read correctly, needle and yarn), where residents will call for banks to be taxed more, instead of cuts to government programs.

On Long Island, knitters will convene on Hempstead Turnpike in Levitown at noon today.

Save Medicare, Big Bank Knit In!

Enough is enough! Big banks and Wall Street crashed the economy in 2008 and left taxpayers to pay for the clean-up. Now, even though banks are once again making massive profits, they’re choking loans and job creation. What’s worse, many big banks pay next to nothing in taxes, while politicians are pushing to cut funding for Medicare, Social Security, education, and other programs for working people.

That is why Wednesday August 3, we’ll be visiting bank branches at lunch time with “Save Medicare” knitting circles! If you’re a knitter, bring your needles and yarn, and if not just come out to support us and make your voice heard!

We will be going to branches in Midtown West, Downtown Brooklyn, by the Grand Concourse in the Bronx, and in Levittown on Long Island.

Long Islanders will be meeting at: