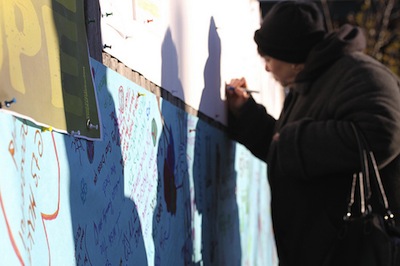 An attendee of a 2010 memorial vigil for Marcelo Lucero signs a tribute poster.

Throughout the week, Long Island Wins will publish editorials looking critically at a report being drafted by the Suffolk County Hate Crimes Task Force. For complete coverage, click here.

The group drafting a Suffolk County report on hate crime answers to the county executive – one of the people the report should be holding accountable.

From the start, Suffolk County Executive Steve Levy opposed a county government investigation into area hate crimes, according to the head of the Suffolk County Hate Crimes Task Force, a group commissioned by the Suffolk legislature to research such crimes and compile its findings in a report.

The head of the task force, Legis. DuWayne Gregory, says that Levy asked him to limit the number of public hearings on hate crimes that the task force would hold across the county, and an email sent to Gregory by Deputy County Executive Ed Dumas confirms that allegation:

In the wake of the brutal and senseless murder of Marcelo Lucero and the heightened rhetoric that marked that period, it was our belief that it was time to ratchet down the rancor and the tensions by instead working on solutions that various sectors of the community could unite behind. We thought the best way to accomplish this goal was through small meetings to encourage dialogue with various stakeholders rather than numerous public forums that we thought could perpetuate hostilities.

According to Gregory, Levy said that he was concerned that public hearings would leave him vulnerable to criticism from his enemies – those who opposed his demagoguery on immigration.

The county executive had good reason to be concerned. During the public hearings, immigrants and advocates repeatedly called out Levy for his anti-immigrant rhetoric, his role in amplifying tensions in the county, and the indifference he had shown to a string of hate crimes leading up to the Lucero murder.

So when that criticism was missing from a December draft of the report by the Hate Crimes Task Force, Gregory looked to Levy’s office.

And he found answers. Gregory learned that the county government group drafting the report – the Criminal Justice Coordinating Council, which falls under the control of the county executive’s office – had forwarded a draft of the document to the Levy administration before showing it to the task force.

Gregory alleges that Levy’s camp cut 52 pages from an existing 150-page draft, including swaths of public testimony blasting the county executive. Levy and the group drafting the report deny those accusations, but whether or not this particular draft was cut is beside the point.

Levy openly admits that he had access to the report throughout the drafting process, since the Criminal Justice Coordinating Council answers to the county executive. That makes it impossible to know how much influence his office exerted during the drafting process.

The Criminal Justice Coordinating Council has done fine work in other circumstances, and the individual members may well be personally honest. But the group should not have been selected to draft this hate crimes report. The inherent conflict of interest – that the group answers to Levy – made it the wrong choice.

As a point of comparison, turn to an independent study: the 2009 report on hate crimes by the Southern Poverty Law Center, “Climate of Fear: Latino Immigrants in Suffolk County, N.Y.”

The center has a longstanding reputation for researching hate crimes and offering prescriptive solutions, and proven expertise investigating complex and sensitive social issues.

The resultant report incorporated into its findings over 100 on-the-ground interviews with Latino immigrants, advocates, and government officials. As an outside body, the center was able to critically examine how the county government and police force handled hate crimes.

Whether due to lack of resources or political willpower, the task force had no such guidance in drafting its report, a perilous way to approach a difficult task. The evidence thus far points to a result that Long Islanders shouldn’t trust – a report that reflects Steve Levy’s interests, rather than those of residents.

Tomorrow: Did the Suffolk County Hate Crimes Task Force receive enough input from immigrants and advocates in researching its report?