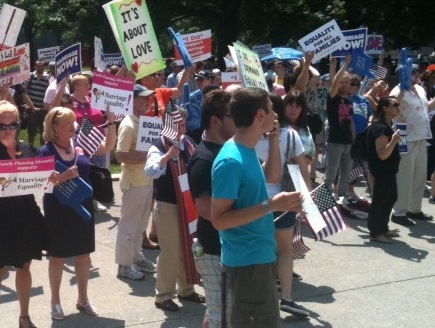 The fight for marriage equality in New York State has complicated President Obama’s campaign fundraising plans. Just as he is about to host a lucrative LGBT fundraiser in New York City, the state legislature has put same-sex marriage rights – an issue the president has avoided – on the front burner.

The Obama administration has been forced to talk about a subject that it apparently would rather let sit quietly. The president’s press secretary Jay Carney responded to questions about Obama’s position by saying that it was “evolving,” apparently at a Darwinian pace.

On Monday, the White House emailed a statement about the bill to the Huffington Post:

“Although the President believes that this is an issue best addressed by the states, he also firmly believes that committed gay and lesbian couples should receive equal protection under the law.”

The problem with the statement is that even if states allow same sex marriages, federal law deprives spouses of the same rights as heterosexual couples.

When Bill Clinton signed the Defense of Marriage Act to curry political favor on the right, he prohibited a United States citizen from applying for an immigrant visa for his or her same sex spouse.

Leaving the matter of marriage equality in the hands of the states might be a lukewarm solution to a pressing injustice if the federal government were not already so decidedly involved in denying same sex couples the same privileges of citizenship enjoyed by folks like me who marry outside their gender.

President Obama needs to stop hiding behind the notion of states’ rights on this issue affecting the lives of tens of thousands of couples. At the least, he must stop pretending that his inaction doesn’t matter.

Image courtesy of @freedomtomarry via TwitPic.