Jess Hunter-Bowman is an associate director at Witness for Peace.

Last year, an estimated 253 people died trying to cross the Arizona desert in the United States.

That’s nearly as many as died in the horrible tornadoes that plowed through the South recently. But while you likely saw news reports about the heart-breaking destruction wrought by the tornadoes, it’s less likely that you’ve seen reports on the deaths in the desert.

According to The Human Rights Coalition, 2,180 migrants have died in that desert while en route to Arizona since 2000. Still, the situation isn’t regarded as a crisis in the manner of a natural disaster.

That’s because immigrants are simultaneously invisible and magnified in our country.

They are magnified by politicians and talking heads who blame immigrants for everything from litter to job loss. Yet many immigrants, especially those who are undocumented, are forced to live in the shadows of our society, effectively invisible.

Perhaps just as important, most people have no idea why immigrants from Mexico and Central America are trying come to the United States, and why they would risk such a potentially life-threatening journey to get here.

Hopefully, that will change.

On May 13-16, a group of a dozen people from Long Island will travel with the Hagedorn Foundation and Witness for Peace to the Arizona border where we will look at the root causes of migration, as well as the perils of the trek to the US.

During our time on the border, we will speak to religious leaders, visit migrant shelters in Mexico, walk through the Arizona desert, and speak to officials from U.S. Immigration and Customs Enforcement (ICE).

We will spend about half of our time in the area near Tucson, Arizona, and the other half in Nogales, Mexico.

We’re hoping that this experience will help open our eyes to the realities on the border, realities of which most US citizens are unaware or choose to ignore. 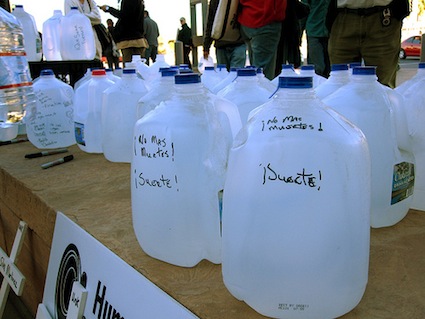 Long Island Wins online editor Ted Hesson – who reported on a Witness for Peace delegation from Long Island to Oaxaca, Mexico in 2010 – will be joining us in Arizona, and he will hopefully have much to share once he returns.

For those who will be traveling to the border as part of the delegation, we appreciate your openness to the experience. and expect great things.

And for Long Island Wins readers who will be following the updates on the website, thank you for your support.

We hope to return from this delegation with insightful and enlightening experiences to share with you.