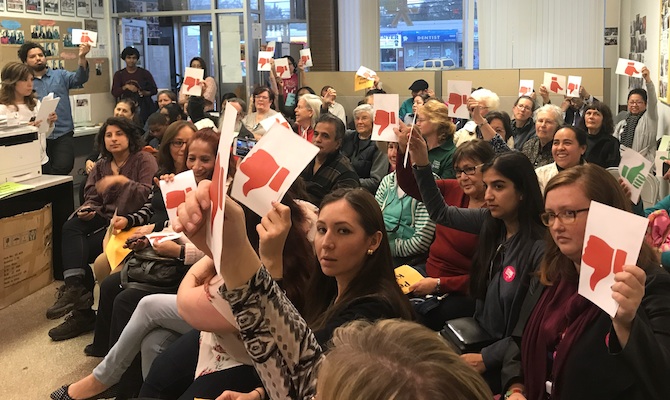 Maryann Slutsky of Long Island Wins introduced the speakers, and explained to the audience why they called a town hall. “We chose to have the town hall here at Make the Road because Peter King came to a community forum here in 2014 at this safe space in Brentwood to listen to the concerns of working class communities of color and immigrants and to express his support for immigration reform with a pathway to citizenship,” she explained, “This year we see a sharp contrast with his support of this administration and its politics of hate.” Gaby Castillo of LICET echoed this sentiment, saying, “We are here to talk about the issues that effect our communities and hold our elected officials accountable.”

Many of the speakers expressed concern that Congressman King fails to represent them in Washington D.C. “I’m an immigrant, I’m Salvadorian, and a woman of color. I do not feel represented by Peter King at all, even though he’s my congressperson.  His stance on hateful, misogynistic, racist policies from the new administration and his support to them is shameful, and as his constituent I want him to hear me loud and clear!” said Alejandra Sorto of LICET.

“Peter King is disconnected from his constituents if he knew [them] he would certainly say to Betty DeVos, ‘There is no way I’m gonna support you and Donald Trump with this school choice program, as well as Trump’s willingness to divert funds out of Title I,’ He would say that, ‘My constituents rely on public school education. This choice is not really a choice.'” said Benjetta Miller of Alliance for Quality Education.

Rosalba Orozco, member of Make The Road, told the story of her son Omar, who developed Bipolar Disorder after being attacked and repeatedly hit in the head. Omar had been arrested for driving under the influence but completed his court-mandated punishment. However, in December of 2016, he was arrested and sent to a detention center in New Jersey because one form in his case had not been appropriately dealt with. Orozco was in tears as Walter Barrientos of Make the Road NY finished her written statement, saying that Omar’s mental health has suffered greatly in detention and that she can only visit him twice a month. “This is his home, the only country he has ever known. He has 53 years of living here, he cannot even read or write in Spanish. He took his first steps in the United States,” the statement read, “This is why we need our congressman to listen to us and defend us through difficult times, like when the system wants to unjustly separate our families.”

Throughout the night, the audience voted on whether or not Congressman King was representing what his constituents needed and wanted by holding up signs with thumbs up or thumbs down. By the end of the night, the scoreboard with all the issues that were discussed, including the Muslim Ban, immigration, women’s health, and equal pay, had a thumb down next to them.

The audience was invited to ask questions and share the concerns they wished to bring to Peter King, including lack of accessibility and worries about education and immigration. One woman in the audience shared an encounter with Representative King at the meeting in Central Islip on April 18th: “I was able to get to Peter King and ask him if he supported immigration reform and his response was ‘Not until we build a wall’.”

Watch the entire town hall below: