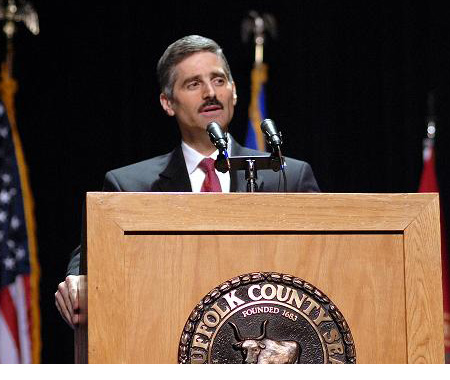 This week’s Long Island Press recounts an interview Steve Levy gave last year after he lost in his bid to become governor. Levy takes time during the interview to attack a Latino man who lost his home during a code enforcement crackdown that targeted Latino housing in central Suffolk:

This brief passage tells a lot about how Levy operates.

First, the county executive obviously sees no problem in a police officer who is supposed to protect the public using his taxpayer-supported time to convince, and likely intimidate, a Latino into signing an affidavit in defense of Levy.

Second, like a lot of his allegations against the immigrant community, Levy levels a charge and then fails to produce the evidence.

Third, before the crackdown, Levy was happy to brag about how he was getting tough on immigrants. When his campaign forced people out of their homes and into the woods, Levy denied his actions had any negative effects on his victims.