On October 8, the first training by the Long Island Civic Engagement Table was held in Bay Shore. The training focused on mobilizing underrepresented voters to participate in our democracy. Latino citizens, in particular, have long been ignored in Suffolk because they are not seen as a significant voting group.

The table hopes to change that perception this year and over coming years by helping immigrants become citizens, assisting new citizens in registering to vote, and boosting their participation on election day. It’s one of a growing number of similar undertakings around the country to improve voter turnout in Latino, African American, and economically underdeveloped communities.

The effort was spearheaded by the Long Island Immigrant Alliance, Make the Road New York, New York Communities for Change, and CARECEN, and is supported by the Hagedorn Foundation. In addition, members of organizations like the Workplace Project, the NAACP, and PRONTO helped get it off the ground. 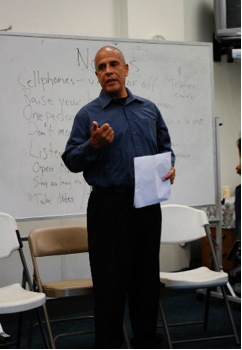 Luis Valenzuela of the Long Island Immigrant Alliance led off the day and provided background on the situation of Latino voters in Suffolk.

At the Bay Shore training, participants discussed how Suffolk residents in villages like Brentwood, Central Islip, and Patchogue want better government services and communication. They also learned how to approach community members who are not already involved in civic action, and try to educate them on how to make their villages better places for everyone. 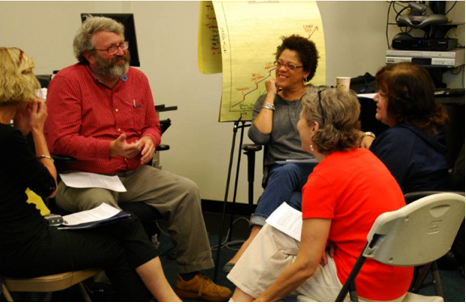 Participants (including me, in the red shirt) discussing ways to gather community support for change in Suffolk County.

The Long Island Civic Engagement Table is a long-term project that will last for years after the polls close on November 8.  It will coordinate voter mobilization efforts in Suffolk, organize training for community groups that want to see greater voter involvement, and hold leadership trainings for immigrants who want to learn how they go from being voters to being candidates in local elections. The table will also work at engaging Long Island residents in community organizing campaigns to advance social and economic justice issues.

For more information, please contact Daniel Altschuler at daniel.altschuler@maketheroadny.org or call him at 917-494-5922.