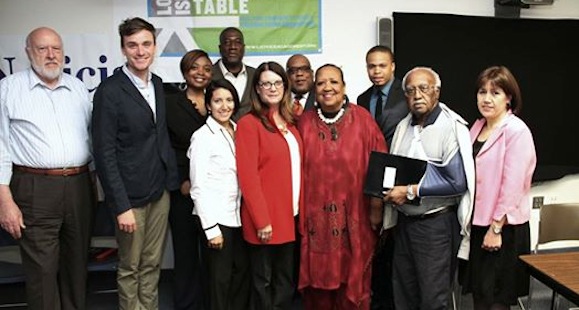 On Monday, six out of seven candidates running for the Hempstead school board appeared before concerned parents and district residents to discuss their plans for improving the success of one of the most diverse districts on Long Island.

The event, part of our “Growing a Diverse Long Island” series of forums, was organized by Long Island Wins, the Long Island Civic Engagement Table, Noticia, and Hempstead Promise Neighborhoods. Tammie Williams, a member of the League of Women Voters of Nassau County, moderated the event.

Elections for the Hempstead school board will take place on May 20, 2014. Watch the videos below to hear what the candidates stand for on various issues.

Question by Timothy John, a Junior at Hempstead High School and President of the Hempstead Student Union:

“If elected to the School Board, what plans do you have to involve the community in decision-making around our schools, and to use our buildings as a resource beyond the school day?”

Question by Steve Izzo, of the Hempstead Classroom Teachers Association and a teacher in the district:

“At the end of the day, we must all be measured by the success of our students. The graduation rate at Hempstead High School is 38%. What are two of your concrete plans to raise the graduation rate?”

Question by Reina Peralta, a mother with students in the district:

“According to the Department of Education, the Hempstead School District is now 59 percent Latino. For one in four students, English is their second language. After years of racial tension in the schools, what will you do to make sure that the needs of all our children are met?”

“If elected to the School Board, how will your partner with non-profits like ours to bring more resources to students in the district?”

High turnover and inconsistencies in administration.

Question by Leslie Williams, a student at Hempstead High School:

“If elected, how would you address the inconsistency and turnover at all levels of school administration?”