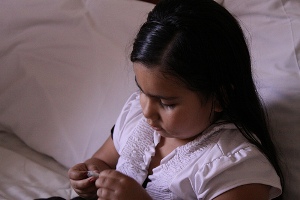 More than a dozen Spanish-language reporters flocked to a hotel in Guatemala City yesterday to hear about the future of a Long Island girl who was subjected to de facto deportation earlier this month.

Despite being a US citizen, Emily Samantha Ruiz was sent to Guatemala on March 11 when her grandfather was denied reentry into the US due to a prior immigration infraction.

According to CNN, Emily will return home to her parents on Wednesday, and in anticipation of her return, David Sperling, her lawyer, and Ben Monterroso, and immigration activist and senior staffer with SEIU, addressed the media in Guatemala on March 28.

Via the Guatemalan national newspaper Prensa Libre, with quotes translated from Spanish:

“I’m going to kiss everyone,” Monterroso said that Emily had told him regarding her return home. “I miss my dad, I miss my mom, I miss my little brother.”

“She’s a lovely child, very sweet; what has happened is an injustice. She’s a US citizen, she has rights, and for that reason they can’t separate her from her family.”

Emily’s lawyer, David Sperling, told the press that Emily was “la cara humana” (“the human face”) of the way that the US immigration system separates families, and that no US citizen should be denied civil rights.

In addition to Emily’s story, there are other ways that US-citizen children can be subjected to de facto deportation, from the voluntary deportation of a parent to economic hardships that drive families to return to their home countries.

According to statistics cited by the Spanish-language news service EFE, more than 3.5 million Guatemalan immigrants live in the US, the majoritity of them undocumented. But their children, if born in the US, are citizens, creating complicated situations such as that of Emily.

An earlier version of this story stated that Ruiz would return home today, citing Prensa Libre.