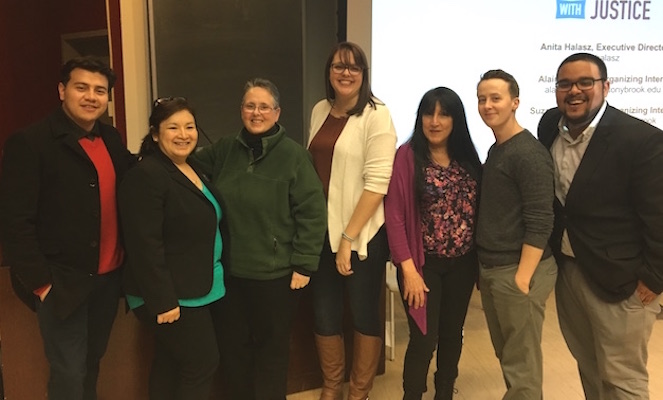 Over 30 people gathered in the Health Sciences Center at Stony Brook University to discuss immigration issues on Wednesday, March 29th. Organized by the Long Island Unity Collaborative, the town hall discussed topics like the Muslim ban, Deferred Action for Childhood Arrivals (DACA), and how local law enforcement is working with Immigration and Customs Enforcement (ICE).

Speakers included Nelson Melgar of Long Island Immigrant Student Advocates, Anita Halasz of Long Island Jobs with Justice, Aadhithi Padmanabhan, an attorney from the New York Civil Liberties Union (NYCLU) who worked on the Muslim ban litigation, and Saba Zare, a Stony Brook University student who was detained at JFK during the first Muslim ban and sent back to Geneva, where her flight to New York had originated from. 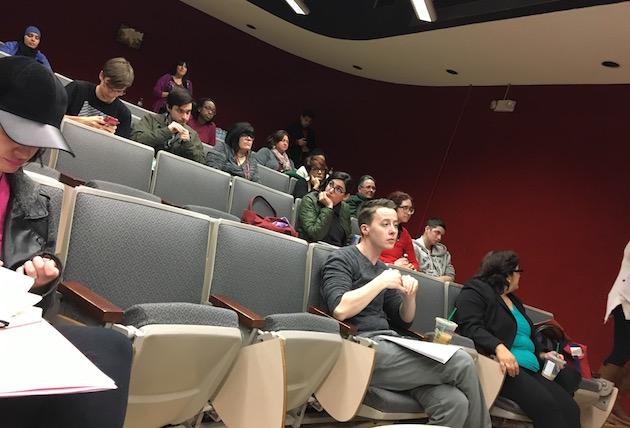 Zare, who was detained because she is from Iran, had been visiting her family in Iran during the winter break. She said that she received no support from Stony Brook University while she was attempting to re-enter the country. “I didn’t get any support from the university,” she told the crowd, “I sent [the university] everything I signed but, yeah, no help…It’s very disappointing, to be honest, because they keep sending me emails saying that they’re so supportive of international students but they are not supportive at all.” Those in attendance were angry that their letters and messages to key administrators did little to aid students like Zare, despite the fact that the administration claimed they were taking steps to help her and others in her situation.

Many of the speakers talked about different opportunities for people to get involved and help immigrants in their community. One such way is the Accompaniment Project, which pairs immigrants with volunteers when they go to various courts in order to show community support as well as providing physical security for those worried about being detained by ICE. There were also discussions about joining rapid response networks in order to help disseminate important community information about ICE activity. Halasz even talked about how the Long Island Unity Collaborative’s suggested actions could be used on campus, including getting departments to sign the Principles of Unity.

“As something happens, organize immediately,” Halasz advised, “Always a good way to ensure the powers-that-be that you’re watching them and let the community know that you’ve got their back.”

You can watch the town hall in its entirety below: