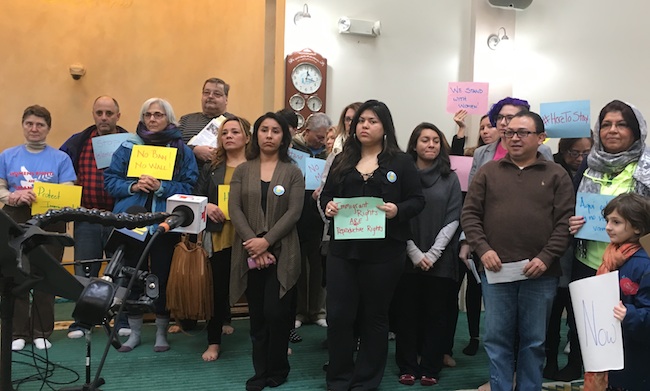 The Long Island Unity Collaborative held a press conference today on President Trump’s immigration executive orders. Hosted by the Muslim Center of Bay Shore, the conference addressed the president’s executive orders that would begin construction on a wall along the U.S.-Mexico border and withholding funding from cities, counties, and districts that adopt “sanctuary” policies. An executive order was leaked that President Trump may place a ban on refugees, with special focus banning people from predominantly Muslim countries, which would further endanger the immigrant community if signed.

Several organizations attended the press conference in support including SEPA Mujer, Long Island Civic Engagement Table (LICET), Planned Parenthood Hudson Peconic, Make the Road New York, New York Civil Liberties Union, and Long Island Wins. Speakers from these organizations relayed their messages of community support, their opposition to the president’s actions, and their continued efforts as organizations to protect the rights and liberties of the immigrant community. Imam Muhammad Abdul Jabbar, the executive director of the Muslim Center of Bay Shore, also spoke during the press conference, denouncing the actions of the president as “opposed to the American values of religious and ethnic diversity that we all hold very dear.”

“We stand here today to stand against hate because an attack on any of us is an attack on all of us,” said Alejandra Sorto, a member of the The Long Island Unity Collaborative, “We will march. We will speak out. We will vote. We will do everything necessary to protect those most vulnerable.”