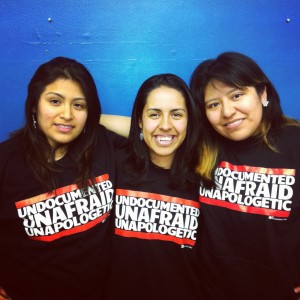 Update: Since this post appeared yesterday on the website of the New York State Youth Leadership Council, the three students who were arrested have been released from custody.

As the New York DREAM Act would help students attain a college degree and contribute tax dollars to New York State, it is difficult to understand the governor’s silence on this bill. Governor Cuomo has a clear opportunity to help change the lives of thousands of youth in New York, but his inaction to include the New York DREAM Act in the budget will continue to crush the dreams of so many youth who want to go to college and contribute to New York State. For more than a year, undocumented youth and supporters have urged Governor Cuomo to take action on the New York DREAM Act through petitions, phone calls, and the mobilization of our communities. So far, there has been no response.

Today, Rosario, Sara, and Janet, three brave women, took part in a peaceful demonstration to urge Governor Cuomo to stand up for undocumented youth by adding the New York DREAM Act into the state budget. The bill would allow these three women and thousands of similar youth to have access to state financial aid to achieve their college educational goals. Instead of Governor Cuomo standing with us, he continues to stay silent and not take action. Rosario, Sara, and Janet decided that the inaction of Governor Cuomo to be the voice for students was enough to prompt action. Rosario, Sara, and Janet risked everything to bring the voice of undocumented youth to Governor Cuomo to take leadership and state publicly that everyone should have access to college education, regardless of immigration status. Right now, they are sitting in a city jail, but any second immigration can get involved. There is nothing that stops immigration from taking action. The longer they sit there, the greater the risk they face.

Read their statements below: 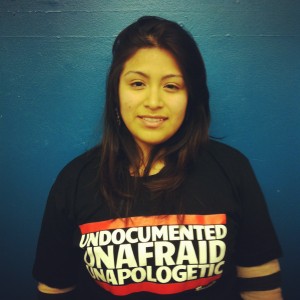 “I was brought, from Mexico, at 11 months and have been raised here ever since. When you look at me or speak to me, you wouldn’t know I’m undocumented. I’ve felt loneliness, depression, anxiety of what’s to come, disillusioned, loss of hope. I’ve faced challenges and difficult circumstances because of my status. I attend Lehman College and I’m currently a junior pursuing a double major in computer graphics and imaging and political science. It’s not an easy journey. Getting arrested on behalf of my community, other undocumented youths, and of course, my dreams, means that I will be sending out a strong message: Sí se puede! We want the New York DREAM Act Now!” 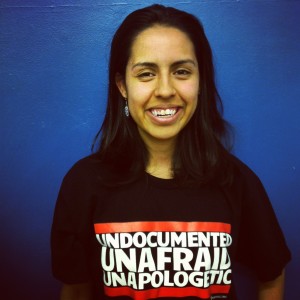 “I believe everyone should have a legitimate opportunity at achieving their dreams, so I fully support the increased accessibility to higher education that the New York DREAM Act would grant to undocumented youth. The undocumented community has shown tremendous courage in the face of augmenting obstacles despite broken promises that constantly fail to recognize our humanity, and that cannot continue to be accepted. I’d like to support and be part of the courage I’ve seen from my community these last few years.” 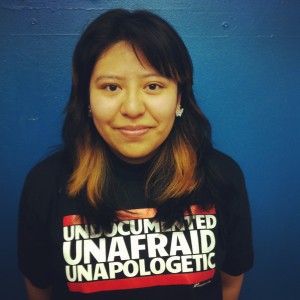 “I want to show the urgency that undocumented youth face every day when they are unable to follow their dreams of obtaining a higher education. As an undocumented student who attends college, I know firsthand the challenges we face when trying to pay for college. After finishing high school I had to work for two years in order to pay for my first years of college. Many never get the chance to do so and the New York DREAM Act would change that. Cuomo’s silence is unacceptable and we need him to stand with us. I’m currently pursuing a degree in biology and I hope to one day work in the medical field.”