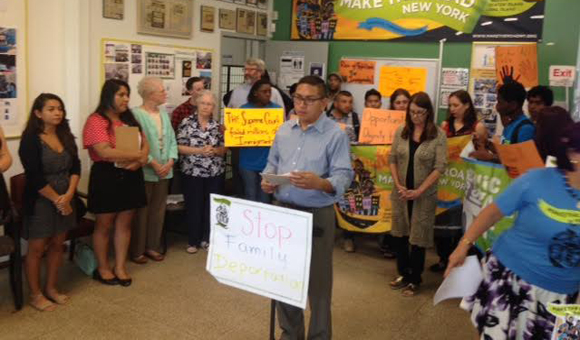 The U.S. Supreme Court ruled to block President Obama’s immigration programs, DAPA and DACA+. This decision will affect more than 4 million undocumented immigrants nationwide, including up to 30,000 Long Islanders, who will continue to live in fear of deportation and risk being separated from their families.

In a disappointing decision (4-4) the Supreme Court ruled that the programs will remain blocked from going into effect. These programs were announced by President Obama in November 2014 and were blocked since February 2015 as a result of a lawsuit introduced by 27 states in a federal court in Texas.

DAPA (Deferred Action for Parents of Americans and Permanent Residents) would benefit parents of U.S. citizens and permanent residents and, DACA+ or the expansion of DACA (Deferred Action for Childhood Arrivals) would benefit young immigrants who came to the U.S. as children. Both would allow undocumented individuals to apply for temporary work authorization and would be temporarily protected from deportation.

At a press conference at Make the Road New York in Brentwood, advocates and immigrants shared their emotional reaction to the Supreme Court’s decision.

“While today’s split decision sets no Supreme Court precedent, these important commonsense polices will unfortunately remain blocked nationwide,” said Maryann Sinclair Slutsky, Executive Director for Long Island Wins. “The fact remains that DAPA and DACA+ are commonsense programs that are lawful, constitutional and consistent with decades of actions taken by presidents of both parties.”

“This decision is a major setback but we will not give up. We must continue our fight. There is a lot of us and we will continue to organize until we have laws that will allows us to live without fear and out of the shadows. Our current and future candidates have to know that we will defend our dignity. We will not stop until we stop the deportations and immigration reform with a pathway to citizenship,” said Teresa Farfan, member leader of Make the Road New York.

“Although the Supreme Court’s decision is disappointing, we do not lose hope. SEPA Mujer, along side our members, will continue advocating for change. There are far too many people living in the shadows who want to be heard.  At this time, more than any other, our undocumented brothers and sisters need our support,” said Martha Maffei, Executive Director of SEPA Mujer.

“The Supreme Court’s ruling against the extension of DAPA will leave many workers across Long Island without any legal protection from exploitative employers. It will also leave many American children on Long Island at risk of losing their parents to deportation. Family separation and wage theft will weaken our community and we are extremely disheartened that the Supreme Court did not take those factors into consideration,” according to Victoria Daza, organizer for Long Island Jobs with Justice.