On this particular Friday, however, there’s a metaphorical roadblock out here, making the normal Hamptons gridlock even worse:

The New York state senators from Long Island have the power to make marriage equality a reality, but instead they’re stalling on a long-overdue piece of legislation that would allow members of the LGBT communities to obtain the same rights as heterosexual couples.

Why are state senators from Nassau and Suffolk so important to this vote?

The Marriage Equality Act has already been passed by the State Assembly and is strongly endorsed by Governor Cuomo, but it can’t come to a vote in the State Senate unless Sen. Dean Skelos (R-Rockville Center) allows it on the floor.

So there’s one big reason that Long Island matters. But that’s not all.

If Skelos—whose office says that he is opposed to gay marriage for religious reasons—allows the vote to reach the floor, then the other state senators from the Island will be closely scrutinized.

Earlier this week, I had an intern at my organization, Long Island Wins, call the offices of the state senators from Nassau and Suffolk counties. What she found was a vision of Long Island that seemed frozen in the 1950s, or perhaps yanked out of a Southern state and dropped in the ocean next to Brooklyn and Queens.

None of the state senators—all of whom are Republicans—said that they would vote for the Marriage Equality Act. Several were outright opposed to the bill, including Skelos.

Sure, people make jokes about Long Island; hair gel, tanning salons, whining over property taxes, etc. But the reality is that Long Island is filled with a diverse range of people, and most residents want their communities to be places that are welcoming for everyone. And, yes, with lower taxes.

So there was a disconnect when we heard that no state senator out here was openly supporting marriage equality. Long Island isn’t a small, out-of-touch community tucked away in a flyover state. It’s an LIRR ride away from the most diverse metropolis in the world, a metropolis that also happens to a historic center for LGBT culture and civil rights activists. 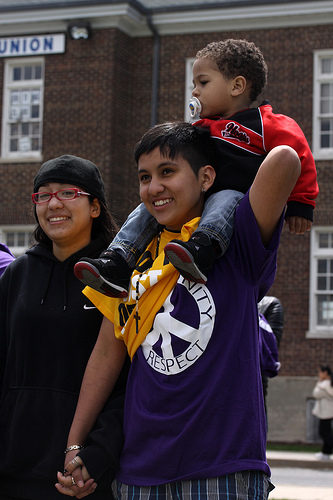 Attendees of an LGBT and immigrant rights rally at Nassau Community College in May. (Credit: Ted Hesson)

That point isn’t lost on the politicians out here, regardless of what they might tell the press about their views.

Even though none of those state senators gave open support to the bill, there were signs that they felt uncomfortable opposing it.

The office of State Senator Kenneth P. LaValle (R-Port Jefferson) said he has voted against similar measures in the past, but would entertain debate on the subject now. Three other state senators were undecided or didn’t want to comment, according to their offices.

That’s a far cry from marching in the NYC Pride Parade. But it does show an awareness that while many Long Island residents are Republican, they aren’t trapped in the 1950s.

People here may care about low taxes, but they also care about equality. Because it directly affects their neighbors, their colleagues, their friends, their own children.

As of this writing, the state senate is still undecided about what will happen with the Marriage Equality Act. In any case, one thing is clear: the road to marriage equality right now is leading directly through Long Island.

Tune in for the traffic report.

UPDATE: Nothing changed on the historic night of June 24 for the New York State Senators from Long Island—all nine state senators voted against the Marriage Equality Act. To read more about how they voted, click here.