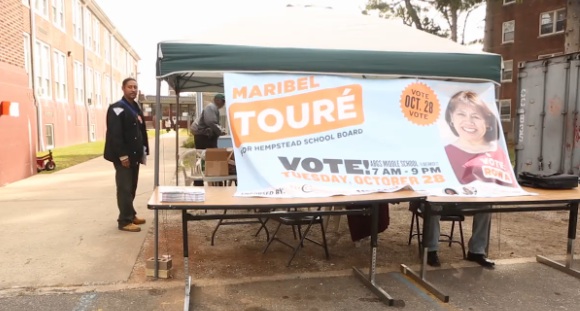 Maribel Touré will finally take her seat on the Hempstead School Board after defeating opponent Betty Cross in a victory that saw her earn almost twice the votes of the latter.

Touré won with 1275 votes to Cross’ 764. The win makes her the first Latino to sit on the school board despite Latinos comprising almost 60 percent of the school district.

“People are going to start to see a light ahead,” Touré told Newsday.

Steve McFarland, coordinator for the Long Island Civic Engagement Table, called Touré’s victory a great sign, but said the real story is the record level of voter turnout. More than 2,000 people voted on Tuesday—double that of the previous election in May.

To have “1,000 new people involved in the process” was “inspiring,” McFarland said.

Tuesday’s special election was ordered by New York State Education Commissioner John B. King Jr. in response to a complaint filed by Touré accusing Cross of election fraud and voter coercion during the May 20 vote. He also removed Cross from the board in August, though she was not barred from running again in the special election.

The election was overseen by monitors from the state attorney general’s office.