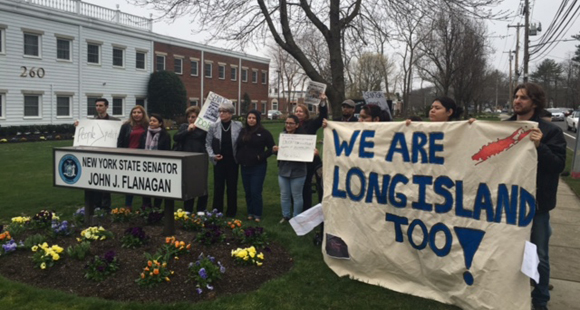 Another year has passed and the New York DREAM Act has been left out of the State budget, making it harder for undocumented students to pursue a higher education.

Hundreds of DREAMers were hopeful that this time the DREAM Act could become a reality since it was a top priority in this year’s budget negotiations. Governor Andrew Cuomo included the DREAM Act in his budget proposal for the second consecutive year. The State Assembly also included it in its budget version but the Senate did not.

But during the negotiation process, it seems that the DREAM Act is the last piece of legislation to be considered.

“In any negotiation you need partners and the Senate was against the DREAM Act, and they pressed the Governor saying that they would not vote if the DREAM Act continued in the budget,” explained Assemblyman Philip Ramos representing the sixth district on Long Island where there is a big immigrant community. “The Assembly was fighting for the bill with the threat of losing funds for education and health but the Assembly Speaker ultimately had to concede.” 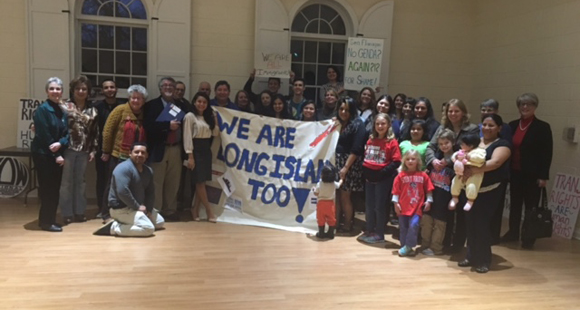 Members of various organizations want their voices to be heard.

The legislation, which was first introduced in the State legislature in 2011, would have allowed undocumented students to apply for the state’s Tuition Assistant Program, TAP.

“It is morally and economically irresponsible for the state with the second highest immigrant population in the country to deny undocumented students the same access to education as their peers,” said Victoria Daza, organizer for the Long Island DREAM Act Coalition.

Supporters for the DREAM Act understand the economic benefit that the bill would bring to the future of the state. Since undocumented immigrants do pay taxes, those who have the chance to get a higher education, contribute to the economy of their communities in large amounts. State eligibility for financial aid to undocumented students is less than two percent of the total TAP budget, according to the Office of the State Comptroller.

Members of the Long Island DREAM Act Coalition have been trying, with no success, to meet with Senate Majority Leader, John Flanagan, who represents the senatorial third district on Long Island. The Senator was an important part of the budget negotiations because of his influential position. However, the Senator has consistently refused to meet.

“I feel disappointed. I would have loved to have a conversation with Senator Flanagan about the New York State Dream Act, and I think it’s embarrassing and we are all just fed up that he keeps not showing up to our meetings and he is not willing to meet with us,” said Gabriela Quintanilla, part of the Coalition and member from the Rural and Migrant Ministry, during a recent Town hall meeting with various organizations. Senator Flanagan was invited to this meeting but he did not attend.

However, the DREAM Act is not the only topic that Flanagan has been apparently trying to avoid.

Last week, constituents from Senator Flanagan’s district and members from different organizations on Long Island visited his office in Smithtown and delivered signatures, letters and petitions. The Senator was not available, but his staff heard their concerns. 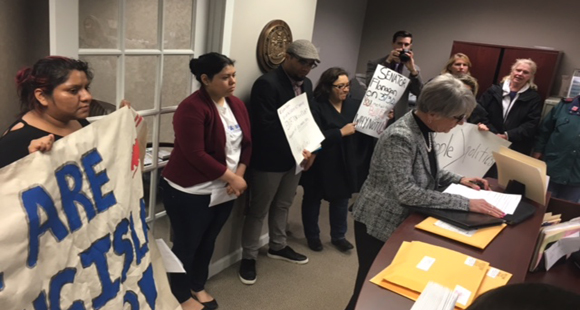 During the visit to Senator Flanagan’s office.

They urged Senator Flanagan to support issues such as the Solitary Confinement Act, a bill which will limit the time people spend in solitary confinement; GENDA, a legislation that would allow transgender individuals to be protected by the state’s human rights and hate crimes laws; human trafficking legislations; more public transportation; among others.

“Ultimately Senator Flanagan needs to support his constituents or he will be the butt of the joke in November,” said Juli Grey-Owens, Executive Director of the Long Island Transgender Advocacy Coalition.