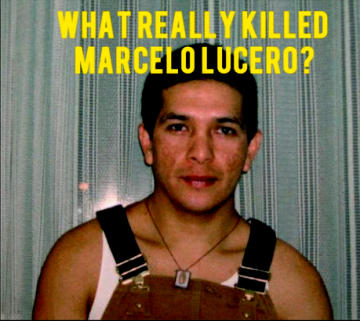 The third in a series of reflections after the premiere of the new documentary Deputized.

When I was at the Sag Harbor premiere of the new film Deputized, the situation there was unique. The film examines the killing of Marcelo Lucero. Not only were the folks who made the film at the screening, but so were family members of two of the attackers as well as Joselo Lucero, Marcelo’s brother. We can all imagine the divides between the attackers’ families and the relatives of Lucero, but there was another divide as well.

Bob Conroy, the father of Jeff Conroy, who was convicted of the stabbing of Lucero that resulted in his death, was there as was Denise Overton, the mother of Chris Overton. While we might be tempted to assume a commonality of interests between these two wounded parents, in fact they are at odds. They sat as far away from one another as possible and towards the end of the program, Ms. Overton sought to dissociate her son from Jeff Conroy and the other five young men who assailed Marcelo Lucero.

Chris Overton was the youngest of the seven attackers and I believe that he was the only one who had not participated in attacks before the night of the killing. He hardly had a clean record. He had been accused of participating in breaking into a house prior to Lucero’s death. The break-in led to the death of the black homeowner, although Overton was not accused in that killing.

As I wrote earlier this week, Jeff Conroy confessed to stabbing Marcelo Lucero within minutes of being picked up by the cops shortly after the stabbing. He later confessed again to a detective. Months later he changed his story. He testified that it was Chris Overton who stabbed Marcelo Lucero. His testimony was so incredible that there were reports that jurors had to restrain themselves from laughing while he testified.

Conroy said he had taken the fall to protect Overton. This might have been understandable if Overton had meant something to Conroy, but apparently he and Overton had only met that night. Not likely that he would have protected a young man he did not know while awaiting trial for the most notorious crime on Long Island in 2008. He told neither his father nor his lawyer that Overton was the killer until shortly before he testified.

Denise Overton’s son participated in a violent attack. He had previously done something very bad as well.  But the evidence is that he was not the killer.

The judge and jury made their decisions about Jeff Conroy’s guilt and punishment knowing that he did not take responsibility for his acts, but that he instead had tried to shift the blame to the one young man he did not know, the one guy he was not friends with.