The goal of our training was to educate the recruits on the importance of incorporating sensitivity into policing practices in immigrant communities. This is a crucial element of policing in Suffolk County as many crimes that affect immigrants go unreported due to specific challenges immigrants face when interacting with law enforcement whether it be mistrust of law enforcement or a fear of deportation. 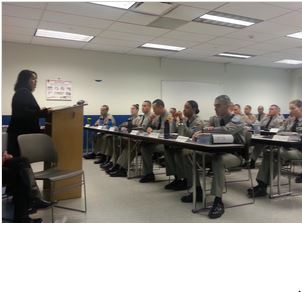 Our training consisted of two segments: tools from our Immigrant Nation program to highlight that we are a nation of immigrants and almost everyone has their own story to tell, and a segment on domestic violence in immigrant communities by SEPA Mujer, a Latina rights organization based in Central Islip that focuses on issues that affect women in underrepresented communities.

The recruits watched “The Caretaker” and “The Mayor,” two diverse short films from our Immigrant Nation program that show modern day scenarios of how immigration positively affects people’s lives, while challenging stereotypes about immigrants. A discussion followed with the recruits about their own backgrounds and experiences and how it relates to their work in policing communities in Suffolk County.

Martha Maffei, Executive Director of SEPA Mujer, then addressed the importance of building trust between immigrant women who are suffering from domestic violence and law enforcement. She showed a video with testimonies from SEPA Mujer members sharing stories of how they sought help to leave their abusers but did not receive adequate assistance from a police officer due to a lack of language access or interpretation services. Martha highlighted the importance of police officers putting aside cultural stereotypes when dealing with members of the immigrant community, especially when working with victims of domestic violence.

Gabriela Castillo, an attorney with SEPA Mujer, spoke of the importance of providing unbiased and accurate interpretation when officers respond to a domestic violence incident. She pointed out the relationship between a domestic violence victim’s undocumented status and crimes of domestic violence that go unreported. She spoke how Congress addressed this concern when it created the U-Visa under the Violence Against Women Act under the Victims of Trafficking and Violence Prevention Act of 2000. Gabriela explained the purpose of the U-Visa, the lengthy application process, and the important role law enforcement plays in immigration relief for victims of crime.

Since the landmark agreement between the Department of Justice and the Suffolk County Police Department (SCPD) in December 2013, the SCPD has increased their efforts to overhaul policing practices in immigrant communities and increase cultural competency trainings for the SCPD. We thank the Suffolk County Police Academy for including us in their trainings, and we look forward to continuing a working relationship with the SCPD to build trust and understanding between law enforcement and immigrant communities on Long Island.