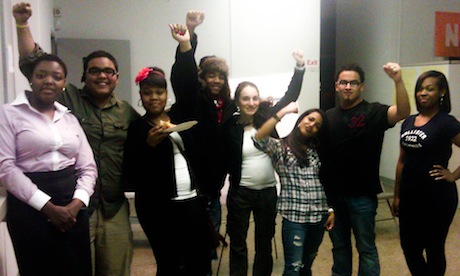 On March 8, a dozen young people gathered in the Brentwood offices of Make the Road New York to participate in a workshop about two state bills that would affect undocumented students: the New York State Dream Fund and the New York Dream Act.

At the workshop, the participants were able to share their own stories and plan ahead for future Dream Act and Dream Fund events in Suffolk County.

Guadalupe Gracida, a Wyandanch resident and a member of Make the Road New York, shared with the group:

I came to this country when I was 14, brought by my parents. I didn’t have a choice. They wanted a better life for me and for themselves. And when we finally got here, we realized it wasn’t gonna be an easy life for us here. Nonetheless, I started going to school, learning English and I graduated top of my class. But now I can’t go to college because I can’t afford it and my parents can’t afford it. The New York State Dream Fund and Dream Act bills would give me the opportunity to go to college and fulfill my dream of graduating college, where I want to major in psychology and history.

Guadalupe also shared that she crossed the border from Mexico into Arizona on foot. From there, she and her parents drove to New York, spending over two days in an uncomfortably crowded van, crushed in, with almost 40 other people. It was a dangerous month-long journey—the family was robbed, and at one point had to hide in a safe house for over two weeks.

Each year, thousands of undocumented youth in New York like Guadalupe graduate from high school with little hope to pursue their dreams because they are ineligible for financial aid to attend college and because they are forced to live in the shadows without a path to legal status. Unfortunately, the federal Dream Act, which would have provided a pathway to citizenship to millions living in the shadows, failed to pass a Senate vote in 2010, and one of the few options for these students to get a higher education is to pass local legislation that would facilitate their access to financial aid.

And now it’s New York State’s turn to do so. But what do these bills do?

The New York State Dream Fund would establish a private commission that would raise funds for scholarships for children of immigrants, both undocumented and with status. This bill requires no public monies, and students would have to apply for the fund. California and Illinois have passed legislation to create such commissions. So far, the bill has been introduced in the State Assembly, and local Assemblymember Phil Ramos (D-Central Islip) has expressed support for it.

The New York State Dream Act, introduced last year by Assemblymember Guillermo Linares and Senator Bill Perkins, would allow undocumented students to apply for state financial aid that is currently available to other students, such as the Tuition Assistance Program (TAP) and other scholarships, grants. California, Texas, and New Mexico have passed similar bills. While the bill enjoys support in the Assembly, no State Senators on Long Island are currently backing it.

So what can you do to help?

Make the Road New York is part of the New York State Dream Coalition, an assemblage of over 30 groups representing undocumented students, immigrant rights organizations, unions, and issue-based lobbying groups, all of whom are working to pass these two bills.

If you want to get involved with our work in Suffolk County, come to our meeting next Wednesday, March 21, at 5pm at 1090 Suffolk Ave. If you can’t make the meeting, help us spread the word by signing this petition.

And if you want to get involved in future meetings and actions, you can contact me at 917-676-2559 or at karina.claudio@maketheroadny.org.

Karina Claudio-Betancourt is a community organizer for Make the Road New York.