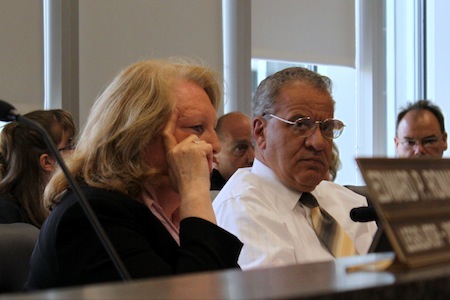 Kate Browning, the sponsor of the bill, at today’s legislative session.

The Suffolk County Legislature plans to vote today on a bill that would limit access to prepaid cell phones by requiring those purchasing the phones in the county to present two forms of identification to a retailer.

The bill, which is sponsored by Legis. Kate Browning (WFP-Shirley), would also require retailers to maintain records of those who purchase a prepaid phone, and to make those records accessible to police.

The phones serve as a lifeline for low-income residents, undocumented immigrants, tourists, and domestic violence survivors, all of whom would have a more difficult time acquiring such a phone if the legislation was passed.

A host of groups (including Long Island Wins) spoke in opposition to the bill, IR 1266, during the public portion of today’s legislative session County Center in Riverhead, and dozens of additional organizations have signed a letter opposing the legislation.

“The community expressed fear and distress that their representatives don’t understand how important it is to have a prepaid cell phone,” she said. “We are not here only to oppose a bill, we are here to represent a community.” 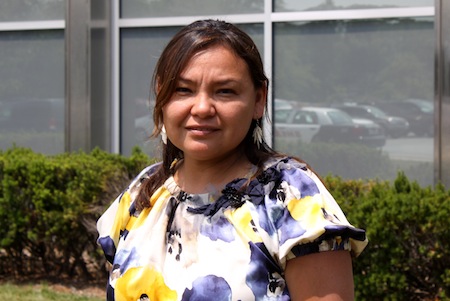 Martha Maffei of SEPA Mujer, outside the County Center in Riverhead today.

Aside from the manner in which the bill would infringe on civil liberties, it would also create additional costs and paperwork for police, without any research to back up its efficacy. Criminals or terrorists could simply buy unregistered phones in Nassasu County, New York City, or on the Internet.

“This proposal creates a new scheme that would be a burden for law enforcement and retailers alike,” said Michele Lynch, Long Island political director at the healthcare workers’ union 1199 SEIU. Lynch added that the legislature lacked any studies to support the bill. “There’s only been rhetoric and speculations.”

But the more prominent message during the public portion of the legislative session was that the bill would negatively affect Suffolk’s most vulnerable residents. Sylvia Baruch of Neighbors in Support of Immigrants told legislators that the issue shouldn’t even be under consideration at the local level:

“I would urge the legislators that if you feel strongly about this issue,” she said, “then you should go to Congress, which would be the proper way to approach it.”