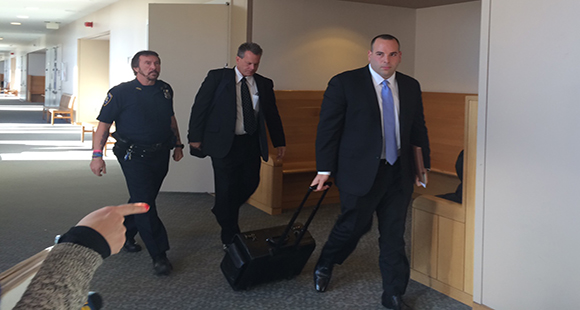 After his arrest, former Sergeant Scott Greene confessed he stole a hundred dollar bill from an undercover officer because he had financial problems, Detective Sgt. David Tricamo explained to the Grand Jury, on Wednesday.

During his testimony on day 2 of the trial against Greene, Tricamo said that the defendant started to get nervous and said “This was a disgrace for himself, his children, his wife.” The defendant said, according to Tricamo, “the IRS is on my ass and I owe them twenty grand.”

The original indictments against Greene were of larceny and official misconduct. However, the Suffolk County District Attorney’s (SCDA) office decided to indict him with a hate crime as more Hispanic victims were coming forward after his arrest, accusing him of stealing cash from them at traffic stops.

At the trial, defense counsel, Scott Gross, insisted on the argument that the SCDA, with help from Latino organizations, fabricated a plan to arrest his client and find people to testify.

Gross argued that a week after the arrest of his client on January 30, 2014, SCDA investigators met with representatives from Make the Road New York (MRNY) an advocacy group for Latinos. MRNY, Gross said, was utilized to identify more victims.

The victims for this case came forward only after MRNY provided names of more people, according to Gross.

Tricamo, who was questioned by Gross, said that is not true. He said that the investigation against Greene began because of a case referred to the SCDA office of an incident that occurred back to May 2012, which is part of a second trial against the former Sergeant. He said that because of the 2012 incident, the SCDA decided that they were going to do an undercover operation at some point.

“In this case like in any other case when we get complaints from the community, our mission is to watch for the safety of the immigrant community, especially when they are victims of police abuse,” said Walter Barrientos, from MRNY regarding this case. “We supported Sgt. Greene’s victims because we believed in them, but we connected them with another organization for legal services.”

But Gross also argued that SCDA office promised to help the witnesses get legal status if they agreed to testify.

Plaintiffs Fernando Galvez-Valencia and Samuel Contreras –both of them without legal status- accused the defendant of stealing cash from Contreras during a traffic stop. They admitted that weeks after the arrest of Greene, they met with investigators from the SCDA office. At the trial, they said that the SCDA suggested that they should fill out an application that would help them to get U-Visas, special visas that are usually offered for victims of crimes.

Gross also asked the alleged victims why they had not applied for citizenship during their time in the U.S. and other questions suggesting their lack of legal status. SCDA representatives objected to these questions multiple times, but Supreme Court Judge Fernando Camacho allowed many of them to proceed.

“The facts of the matter are that these people are getting incentives that are unprecedented,” said Gross during an interview with Long Island Wins. “I have never seen anybody getting a Visa to get access to this country for being the witness to a large suit.”

Galvez-Valencia and Contreras were pulled over by former Sgt. Greene sometime between late Summer or early Fall, 2013. Testifying separately they explained that Contreras had gone to Gabino’s Diner, the place where his friend Galvez-Valencia works. Contreras offered to drive his friend home. Galvez-Valencia had $300 in his pocket when they left the restaurant. Contreras was driving and Galvez-Valencia was in the passenger seat. They were driving on Route 60 in Suffolk County and they entered a gas station located on the same Route to put air in the vehicle’s tire. They left the gas station, taking the same route and that is when the defendant stopped them, they said. They explained that the Sergeant asked Contreras for his license, to which he responded that he did not have one. Then the defendant, according to the plaintiffs, told them to get out of the car, searched their pockets, took their wallets and returned the wallets. Then, the defendant said they could leave. Galvez-Valencia checked his wallet and realized that he was missing $100.

“I think today’s testimonies really speak to the use of that kind of authority in power, yet two guys getting out from a regular day of work, you know, stopping to get some air for their tire and go home, is something that we do every day,” said Jason Starr, Long Island Director for the New York Civil Liberty Union. “But that got them victimized. This person that has too much power from the state and knows that is dealing with a population that is vulnerable.”

Also, at the trial, plaintiff Marco Guallpa, an immigrant from Ecuador, who lived in Patchogue, also accused Greene of stealing money from his wallet. This incident occurred on September 8, 2013, at approximately 4:00 a.m. when he was driving home on Route 25, in Coram, according to Guallpa. When he was pulled over he asked Sergeant Greene why he was stopped. The officer asked for his license. The officer returned his license and asked him to get out of the car, searched his pockets, took his wallet, inspected his vehicle, and left the wallet in the car, Guallpa explained.

Then, Guallpa realized he was missing $120 and decided to go to the 6th precinct. At the precinct he told the desk officers what had happened. The officers explained the situation to Sergeant Vincent Desorta. Greene came to the precinct and talked to Desorta. Greene denied that he stole the money. Desorta convinced Guallpa to return to his car and search his vehicle and he even returned to the place where he was pulled over. He never went back to the precinct to make a report. After the defendant was arrested Guallpa decided to come forward. His lawyer contacted the DA.

Desorta also testified at the trial and confirmed that Guallpa went to the precinct that date. He reported that incident to his superior when he realized that Green had been arrested.

Guallpa’s testimony is relevant and “proves that this was a pattern and proves that MRNY’s involvement was helpful but does not necessarily have the negative impact” in the argument that Scott Greene’s attorney is trying make, explained Nancy Trasande, Senior Counsel for Latino Justice, a social justice organization.