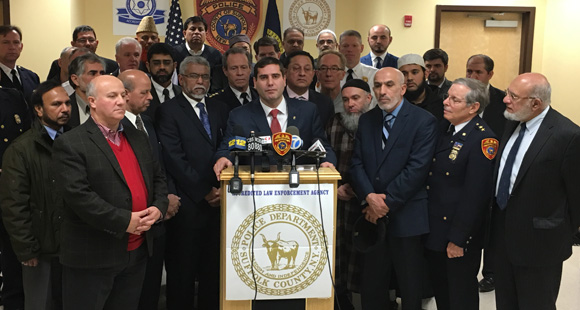 The meeting, which was called by Commissioner Sini, gathered about 30 people from the Muslim community including Imams representing various Mosques in Suffolk County.

Their biggest concern is that they can be targeted because of their religious beliefs. Commissioner Sini, as well as Suffolk Police Chief of Department, Stuart Cameron, committed to provide security and protect Mosques around Suffolk.

“It is important right now to engage all the diverse communities in Suffolk County but particularly the Muslim community in light of some of the national rhetoric,” said Commissioner Sini in an interview with Long Island Wins.

“That is important from a law enforcement perspective and from a community policing perspective. We want to build trust between the Suffolk County Police Department and all our diverse community so we can be effective partners in our fight against crime,” Sini said.

The recent attack in San Bernardino as well as the anti-immigrant and anti-Muslim rhetoric at the national level are making Muslim leaders on Long Island very concerned about possible retaliation against their community, according to Nayyar Imam, head of the Long Island Muslim Alliance, also SCPD Chaplain and Long Island Wins’ Board member.

“Right now we are scared,” Imam said. “We wanted to get some kind of help from law enforcement.”

The SCPD will be focusing on doing community outreach to train Muslims and Muslim women in particular on how to avoid being victims of crimes, according to Sini.

Sini also said the police are going to have a direct contact person for the Muslim community, who will deal with hate crime, and will develop a private message system so they can share relevant information with the community.

Commissioner Sini said there is no specific threat against Muslims on Long Island right now, but Imam thinks they need to be prepared.

“We should be prepared for some kind of incident in the Mosques and incidents should be reported to the police so they are able to investigate,” Imam said.