Immigrant rights advocates, including Long Island Wins executive director Maryann Sinclair Slutsky, testified before members of the Suffolk County Legislature as to the need to improve policing practices in the county, as well as calling for a further investigation into the reason why systemic anti-immigrant policing practices were in place.

“The Department of Justice agreement takes important steps to build bridges between the community and the police department,” testified Maryann Sinclair Slutsky. “Most importantly, we need to make sure that all crimes against all members of the community will be thoroughly investigated without regard to the race or ethnicity of the victim.” 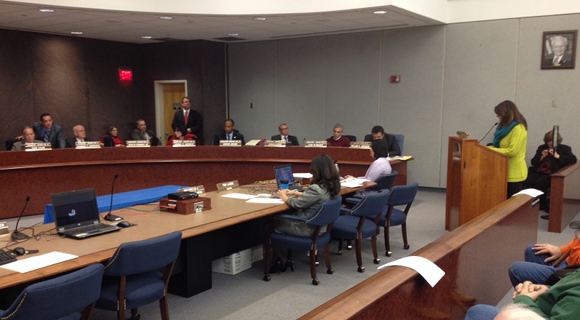 Maryann Sinclair Slutsky testifying before the Suffolk County Legislature.We recognize that tremendous progress has been made by County Executive Steve Bellone and his administration in treating all of Suffolk County’s residents with dignity and respect, including passing new language access assistance policies.

While it’s great news that the new practices will be put into law, we must carefully monitor the implementation and enforcement of the settlement as well as the SCPD’s enforcement actions in response to crime complaints by immigrants in the future.

Immigrants in Suffolk County expected and are still waiting for an accounting of why their crime complaints were not investigated by the SCPD.

We are calling for a further “fact finding” as to what led to the failure of the SCPD to investigate crimes against immigrants, as outlined by Juan Cartagena, president and general counsel of LatinoJustice PRLDEF, in his Newsday Op-Ed.

The SCPD-DOJ settlement agreement was born out of the 2008 hate crime killing of Ecuadorian immigrant Marcelo Lucero. Joselo, Marcelo’s brother, also testified at the public hearing. 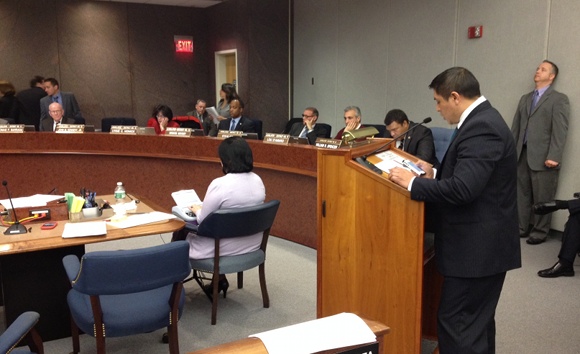 Joselo Lucero testifying before the Suffolk County Legislature.The agreement provides for extensive Federal monitoring of Suffolk County Police Department’s practices over the next three years. In order to provide oversight, the Suffolk Police will have to gather detailed data on traffic stops, hate crimes, and other racially sensitive policing issues. The data will be used to uncover police biases.

Hate crime data will also be mapped to determine if any trends in bias crimes indicate patterns of community conflict. In addition, the Justice Department says it will be looking at whether possible hate crimes are downgraded by the police department or “undercharged” as they were during Steve Levy’s administration.

The agreement also mandates a high level of language access for Spanish speaking Suffolk residents. The practical effects of its implementation should lead to many new hires of bilingual police officers.

Perhaps most importantly, the agreement requires the police to meet regularly with both the leaders of the Latino community and with grassroots community groups as well. It creates review boards that will monitor implementation and orders community satisfaction surveys to determine how the police are doing in reaching out to immigrants.