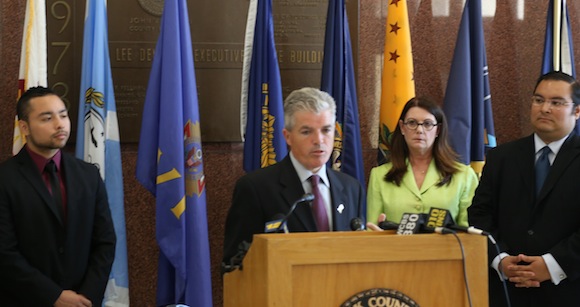 This is County Executive Bellone’s third year in joining Welcoming Long Island and Long Island Wins in supporting efforts to create more inclusive communities and foster a spirit of mutual respect and cooperation between foreign-born and U.S.-born Americans.

“We are so proud to be kicking off another Welcoming Week here in Suffolk County,” he said. “We know that immigrants are hard working and industrious and contribute to our quality of life and our economy by starting new businesses and being productive members of our community.”

Bellone called welcoming a “fundamental American obligation,” adding, “To not do that is to deny who we are as a people.”

“Celebrations during Welcoming America’s National Welcoming Week are part of a powerful and growing movement across the country,” said Hendel Leiva, organizer for Welcoming Long Island. “Communities recognize that they are more vibrant and economically competitive when immigrants and their contributions are welcomed.”

The third annual National Welcoming Week, which began Sept. 13 and runs through Sept. 21, has more than 100 partner organizations hosting more than 150 events across 27 states. From soccer tournaments in Durham, N.C., Dayton, Ohio, and San Antonio, Texas, to cooking classes in Detroit, Mich., and naturalization ceremonies, National Welcoming Week is bringing together over 13,000 people nationally.

Join Long Island Wins and Welcoming Long Island for our third and final National Welcoming Week event for the year tomorrow in Wyandanch. A diverse group of faith leaders will call on their neighbors and colleagues to treat children seeking refuge from violence in Central America on Long Island with compassion and dignity. The event will take place at 1 p.m. at Our Lady of Miraculous Medal Church. Click here for more information.