Newsday’s Joye Brown reported yesterday on what Latino leaders found when they went inside the Third Precinct in Bay Shore last week.

The group had just finished a press conference calling for the Suffolk County Police Department to be more accessible to immigrants following the release of a memo from the US Justice Department on Suffolk’s mishandling of hate crimes against Latinos. While the press conference was getting underway, the police brass sent out a release touting the new, immigrant-friendly SCPD. When the immigrant leaders went into the precinct to talk to Inspector Jan Rios, who commands the precinct, they were met with a sign that said, “Are We SLOW LEARNERS or What?” and that quoted Teddy Roosevelt saying, “Any man who says he is an American, but something else also, isn’t an American at all. We have room for but one flag…we have room for but one language.”

The Suffolk police leadership has long been hostile to investigating attacks on immigrants by white people. The department has also been notorious for its failures to make its protection available to non-English speakers. This is not “ancient history” from before the Marcelo Lucero killing. At a police-community meeting held over the summer in a village with a large Latino population, the police refused to bring interpreters who would allow immigrant voices to be heard.

The anti-immigrant sign at the Third Precinct has been up for months, if not years. The top cops in Suffolk say it does not reflect official policy, yet it was seen by officers every day and was easily visible to visitors like those participating in the Long Island Immigrant Alliance delegation. It was only when the community leaders objected to it that it was taken down. 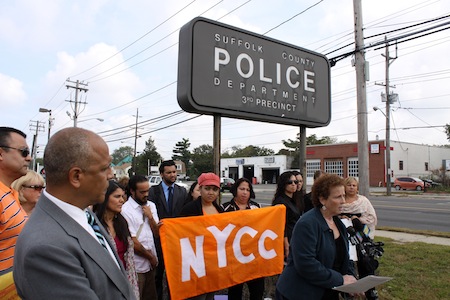 The Empire Justice Center’s Cheryl Keshner speaks at a press conference in Bay Shore last week about the need for all Suffolk residents to be able to communicate with police. (Photo credit: Ted Hesson)

Those who know Roosevelt’s quote know that it was said in criticism of Italian-Americans, German-Americans, and Irish-Americans. After his son was killed in World War I, the heartsick Roosevelt became obsessed with the threat to America of these potentially disloyal immigrant groups. At one point, he urged that public schools ban the teaching of foreign languages, and many states did ban German.

The speech the police sign quoted was given before the American Defense Society on January 3, 1919, two months after the war ended and just three days before TR died. That same week, Roosevelt called for the dissolution of “foreign associations” in immigrant communities. These were what we today call ethnic associations.

Interestingly, the Suffolk County Police Department has a number of active ethnic associations open to its officers that Roosevelt would see as diluting what he called non-hyphenated “100 percent Americanism.”

For example, the Suffolk County Police Officer’s Emerald Society has the stated mission of countering the Americanization of Irish American officers by promoting and fostering “interest and concern in Irish history, culture and tradition.” Roosevelt would not approve.

Even worse, the organization gives out an annual “Irishman of the Year Award,” further encouraging the adoption of a dual loyalty among the police. 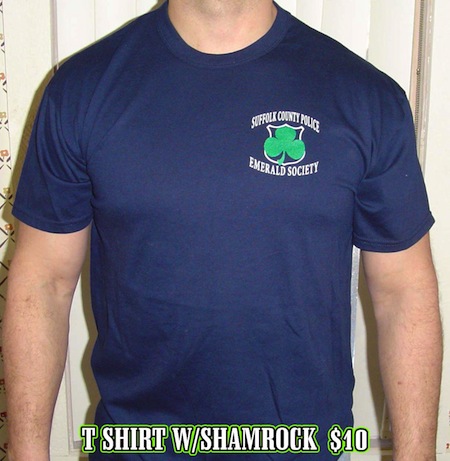 As bad as the Emerald Society must sound to you, there is another group of cops even more geared toward ethnic dilution. You might be forgiven for thinking that the Suffolk Police Columbia Association encourages officers to learn about Christopher Columbus. You would be wrong. Under the guise of an organization devoted to the first European to vacation in the Dominican Republic lurks a group trying to weaken the United States by fostering an Italian identity. The group undermines the solidarity of Americans by encouraging young people to give up the national sport of baseball and take up the bocce ball instead!

All kidding aside, Roosevelt was railing against the great-grandparents of the very cops who put up and saw the anti-immigrant sign in the Third Precinct. He viewed their ancestors as dangerous foreigners who demanded that things be translated into German, insisted on rolling bocce balls on Sundays, and had an unhealthy interest in Irish freedom. And now some of these cops have adopted the same attitude towards the immigrants they are sworn to protect and serve. 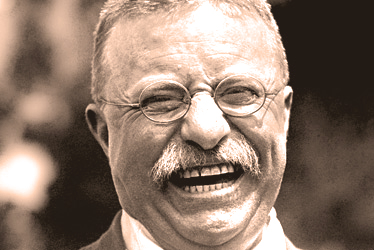 Let’s hope that 100 years from now, my great-granddaughter is not writing the same blog condemning the same quote being put up by a member of the SCPD Ecuadorian Association.

The marginalization and exclusion of immigrants by Suffolk County government must end. Signs that tell the public that “No Latinos Need Apply” for police protection attack the civil rights of immigrants and work to destroy the principles on which America was founded. They hinder law enforcement and make us all more vulnerable to crime. Most importantly, they reflect a disgusting antipathy towards human beings who deserve to be treated better.