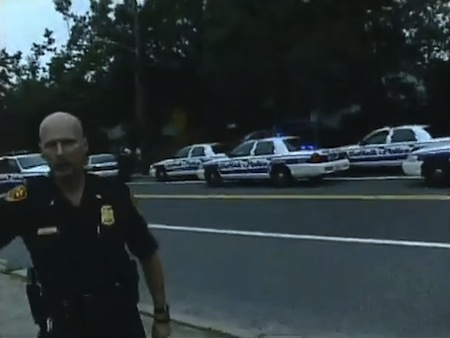 An accredited journalist filming a crime scene in Bohemia on Friday was arrested by Suffolk County police for apparently no reason—and he has it on film.

The events started to unfold Friday about 6:15 p.m.

An undercover Suffolk County officer began following a suspicious vehicle in Ronkonkoma and tried to pull it over. The driver took off, hitting the bumper of the unmarked police vehicle.

About 10 minutes later the vehicle pulled into a driveway at 744 Sycamore Ave. in Bohemia. Several marked police cars rushed to the scene to help arrest two suspects.

A credentialed member of the press, working for an organization that sells news footage, arrived at the scene and began videotaping the crime scene.

The photographer was identified as Phil Datz. He was standing across the street, when an unidentified offer started yelling for him to leave the scene. Datz asked how far back the officer wanted him to stand. The officer told Datz to simply leave because, “it’s an active scene and you’re leaving.”

The officer continue to yell, saying, “I’ve been doing this for 30 years and there’s nothing you can hold over my head or anyone out there. Go away.”

The order appeared to be a violation of Datz’s rights as an accredited member of the press. He was ordered to leave an area that other people, including children, were allowed to remain.

“The department is conducting an internal review of the incident between a Suffolk County Police Department supervisor and a photographer that resulted in the photographer’s arrest. I am working with the Suffolk County District Attorney to have the arrest nullified.