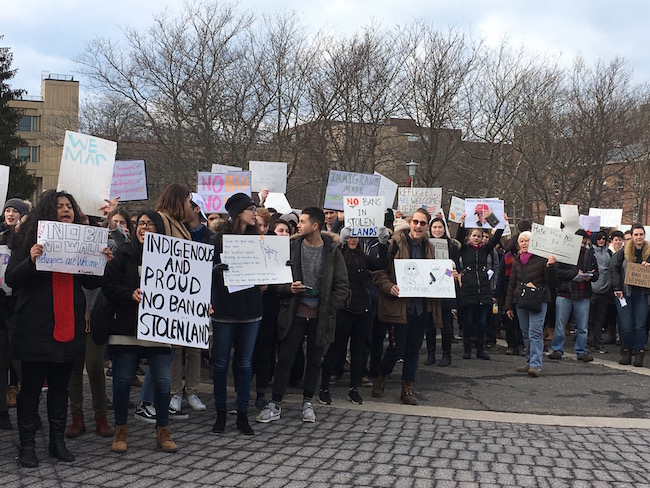 Over 850 students, faculty, staff and more gathered for a march outside of the Student Activities Center on Stony Brook University’s campus on February 1st, 2017. The march for unity was in protest of President Trump’s executive order that halts refugee resettlement as well as immigration from seven Muslim-majority nations, including Iran, Iraq, and Somalia.

The march was organized by the Feminist Majority Leadership Alliance in partnership with New York Civil Liberties Union (NYCLU), Stony Brook College Democrats, Planned Parenthood Generation Action at SBU, and Coalition University Students for Progress. Organizers first addressed the crowd with speeches of solidarity as well as personal stories about classmates and family members. The procession then swept through the center of campus, with onlookers peeking out of windows and doorways to watch the chanting protesters make their statement: “Say it loud, say it clear, refugees are welcome here.”

Sayidana Brannan-Douglas, the undergraduate representative for the Stony Brook College Democrats, said that even though the march only came together earlier that week, the response from the community was overwhelmingly positive: “We organized this within a few days in response to the executive order, and we got so many responses from everyone…on this campus, we are about unity and love.”

Manny Gomez, the NYCLU Campus Organizer, disclosed that the executive order affected students directly, “A couple of students at Stony Brook were effected by this, people that we know, that go to campus, that are leaders in our community…[the executive order] came out while some of our Stony Brook students were on vacation abroad, who were studying here, and who almost didn’t come back. This is why we’re here.”

Jenn Fogarty, a student at Stony Brook, perhaps summed up the message of the march best when she said, “I came to the march because I believe in equality. I don’t want anyone who lives here or wants to live here to be denied, I don’t think that’s what this country’s about.”