Steve Levy’s days as Suffolk County executive ended on Sunday. Like any executive leader with a long tenure, he leaves behind a wide-ranging legacy with much to debate. But what’s not debatable is his morally inexcusable embrace of politics as mass racial profiling. We’ll be recovering from that for a long time to come.

Levy thought stigmatizing immigrants was a political winner. He provided a key insight into his thinking in November 2009—just a year after the lynching of Ecuadorian immigrant Marcelo Lucero—when he advised a legislative protégé to go run on “the illegal immigration issue” because he was in a close race. When the legislator lost his election, Levy criticized him for not following his advice.

Like the extremist groups who supported his policies – such the now-extinct Sachem Quality of Life—when speaking about immigration, Levy didn’t feel the need to deal in fact. He was fine creating the illusion of an immigrant crime wave in Suffolk at a time when crime was actually plunging in the county (and, for that matter, across the country). And he put forward the bizarre and unsupportable claim that Suffolk hospitals were at risk of closing because of an influx of immigrants; hospital officials were left to explain that the claim was pure fantasy on Levy’s part, with no such closings even being considered. 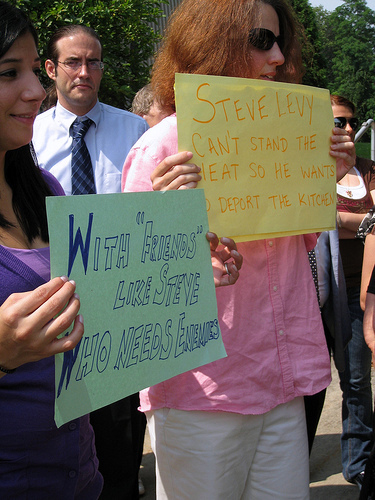 The damage Steve Levy did to policing in Suffolk will perhaps be the hardest to undo. In 2003, the Suffolk Police Department was gradually moving into the national mainstream of police relations with immigrant communities. After Levy took over, he put into place policies guaranteed to alienate immigrants from the very cops who were supposed to protect them. The highly regarded Southern Poverty Law Center published a devastating account of the “climate of fear” that immigrants were forced to live under in Suffolk County. And a federal government investigation of Suffolk’s policing policies has issued a devastating initial report outlining the weaknesses in the county’s approach to protecting immigrants.

Levy also made it difficult for journalists to hold him accountable for his immigration policies. All politicians, as the saying goes, “work the referees,” but Levy went to special lengths. An investigation by press watchdog Media Matters unearthed evidence that the county executive had lobbied to have several Newsday reporters reassigned because he didn’t like their coverage of the issue. He also dictated to local cable news who could appear opposite him in immigration-related debates.

Levy cut off county government services to a whole generation of Latinos and immigrants. Those who voiced the concerns of these communities, including members of the Suffolk County Hispanic Advisory Board, were pushed out of government. Many others didn’t bother pursuing a career in an administration they knew to be hostile to them and their families. The one-in-seven Suffolk residents who are foreign born have American-citizen children who’ve grown up under an administration that demonized their parents and branded them as second-class citizens.

Perhaps in Levy’s mind, a “blame the immigrants” approach to county government served to distract from his failure to deal with the proliferation of costly special districts, the explosion in the size and number of inadequately regulated local public safety departments, and a crooked county contracting system. And too many politicians followed his lead.

The Levy administration is over, thankfully. The task of rebuilding in his wake falls to the next county executive, and to all of us.