A few days ago, I received an invitation to the Suffolk County Human Rights Commission’s 2011 awards dinner.

The invite was printed on radiant teal paper, but aside from the color shock, it was more or less ordinary: a list of honorees; date, time, cost, location, etc.

As I scanned it, however, I paused at the reading of the “special guest”—Suffolk County Executive Steve Levy.

If you’re not familiar with Levy’s record on immigrant rights, click here to read a 2009 report in which the Southern Poverty Law Center dubbed Levy the “enabler-in-chief” for fostering a political environment in Suffolk that marginalized Latino immigrants.

Not enough? Since that report came out, the U.S. Department of Justice launched an investigation into the Suffolk County Police Department for discriminatory policing against Latinos. In March, a coalition of immigrant rights supporters, including Long Island Wins Director Maryann Sinclair Slutsky, asked department representatives to expand their investigation to examine whether or not Levy interfered with how the county handled hate crimes.

That makes Levy kind of a strange choice to kick off a human rights awards dinner, don’t you think?

Well, inviting Levy wasn’t exactly a choice. The Human Rights Commission is funded by the county, and as a matter of course, the county executive is usually invited to these types of events. So are county legislators.

But not only is Levy billed as a “special guest” for the dinner, he’ll issue a greeting for attendees, according to Rabbi Steven Moss, the chairperson of the commission.

Do any members of the commission intend to call out the county executive for his record on immigration?

“No,” Moss said. “There will be no formal statements in terms of that.”

Moss says that Levy’s history on immigrant rights isn’t the topic of discussion at the event, and likely won’t surface in any speeches.

“The purpose of the dinner is to acknowledge the work of the commission and those who are involved in this area,” he said.

Moss stressed that the commission doesn’t always give county leadership a free pass on human rights.

“Over the years, we have taken up issues which have not been in agreement with county executives,” he said.

Is this dinner going to be one of those instances?

“No, because that’s not the purpose of this.”

The county executive’s record of anti-immigrant rhetoric and policies should startle both the Human Rights Commission and its honorees, but it appears that the attendees will keep any concerns private.

For an example of Levy’s tenor on the issue, scroll down and listen to a clip of the county executive talking about illegal immigration at a 2006 event at Lindenhurst Library.

It’s hard to imagine that the people and organizations giving and receiving awards from the Human Rights Commission will consider it an honor to earn this sort of endorsement. 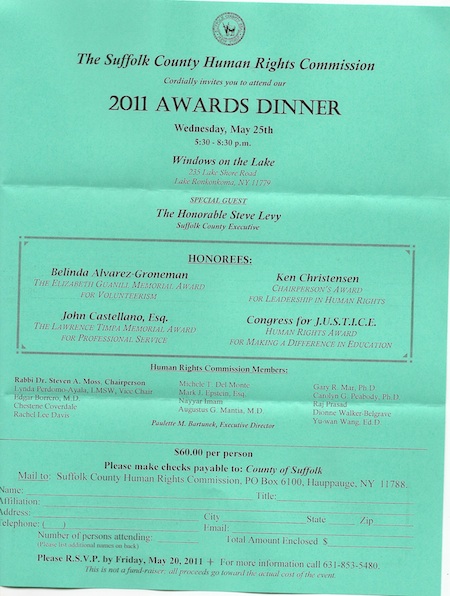