I went to the rally in East Meadow this morning that was ostensibly calling for Long Island to immeadiately reopen in the face of the COVID-19 Pandemic that has killed 3,000 Long Islanders over the last two months and I was left with this question: Why were there Confederate Flags at the rally? Twenty feet in front of the speakers’ stand at the rally of about 150 people there were two Confederate flags prominently displayed. During the hour I was there, not one of the ralliers asked that they be removed. 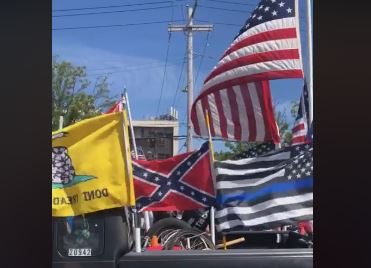 They can’t claim that this was about honoring heritage. Long Island is well above the Mason-Dixon Line and was never part of the Confederacy. The Long Island regiments and companies that fought in the Civil War all fought against the Confederates. If they claim it symbolizes “states rights,” then why defy the governor of a state?

Every person I saw at the rally was white, apart from a few African American police officers. They did not just carry signs denouncing social distancing and other rules for slowing the spread of the virus, they also had signs on a whole host of far-right conspiracy theories ranging from “Benghazi” to Flouride in the drinking water. This was not so much a rally to reopen, as an ingathering of the clans of Long Island’s far right. And of course central to that section of our population is maintaining white supremacy.

The Three Percenter militia was also at the East Meadow rally.

Here is video I took of one of the Confederate flags at the East Meadow rally on Sunday. It was taken between 10:30AM and 11:00AM.