Since the 2008 killing of Ecuadorian immigrant Marcelo Lucero, local and national media have devoted much attention to the crime—a fatal attack by a gang of teens targeting Latinos—but have given less attention to the community leaders working to bridge the gap between native- and foreign-born residents in the area.

One of those leaders is Gilda Ramos, a Spanish-speaking library assistant at the Patchogue-Medford Library. As a result of her work helping new immigrants by providing language classes and community programs, Ramos has been named the 2011 Paralibrarian of the Year by the Library Journal, a national magazine. 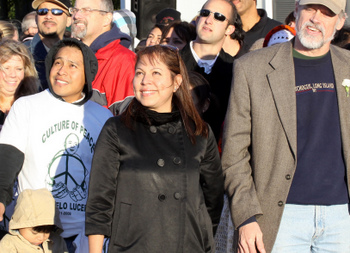 Ramos (center) at a November 2010 memorial for Marcelo Lucero.

The recognition comes after the library won a 2010 National Medal for Library Service, also related to efforts to reach out to immigrant residents.

In addition to honoring Ramos, who is a Peruvian immigrant, the magazine featured her on the cover of its March issue. For the full article, click here.

They had to create the right job to bring Gilda Ramos on full time at the Patchogue-Medford Library (PML), NY. The first to be hired in a new civil service category called “Spanish Speaking Library Assistant,” approved in late 2007, Ramos delivers and exemplifies phenomenal library service in that role since stepping into it in January 2008. She combines extraordinary daily contributions to the people of the community with her total belief in the importance of serving others. That has made her invaluable at PML, so much so that she is one of a half-dozen staff primarily responsible for PML winning a 2010 National Medal for Library Service, presented at the White House by First Lady Michelle Obama.

A growing population in New York’s Suffolk County hail from nations like Ecuador, Mexico, and other places where Spanish is spoken. Once the new job description was approved, other libraries in the county began to hire paralibrarians fluent in Spanish.

In the village of Patchogue and hamlet of Medford, on Long Island, Hispanics are now about 30 percent of residents. At the library there, which serves a population of approximately 50,000, Ramos goes way beyond the job description to empower these people in their new country. She is so good at that work, and so dedicated to it, that it a pure pleasure for LJ’s editors to name Gilda Ramos the 2011 LJ Paralibrarian of the Year, an award sponsored by DEMCO, Inc.