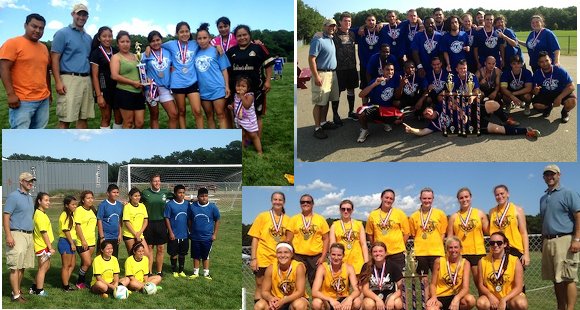 There are two things that bring people of different personalities and different backgrounds together, according to Suffolk County Legislator Robert Calarco. Those are food and sports.

Calarco was speaking at the sixth annual Play For Peace soccer tournament at Medford’s Patchogue-Medford Youth Soccer Complex, which Welcoming Long Island participated in for the second year in a row on August 9.

The community-building soccer tournament began as a tribute to Marcelo Lucero, the Ecuadorian immigrant killed in a hate crime in Patchogue in 2008. Over the years it has grown to become a day to celebrate diversity and good sportsmanship in the Patchogue-Medford community. The event was organized through Calarco’s county legislator office.

This year, the soccer tournament coincided with the summer of the 2014 Brazil World Cup, adding to the day’s excitement and festivities as many of the players and spectators were still in the spirit of the passion of the global event. Many had never connected or bonded through soccer before, but it was clear that there was a newfound interest in the sport, whether it was playing, or live tweeting about the game, or using Instagram to capture key moments.

Calarco reflected on how far the soccer tournament has come since 2008. “The reason we started this tournament is that we had a horrific incident occur in the Village of Patchogue, we had a hate crime occur,” he said. “Our community could have gone in one of two directions, and thankfully we went in the right direction, a positive direction.”

It was remarkable to see just how much community members have grown fond of the tournament. It has become a staple of the community’s annual events. Many of the teams and players had played in previous tournaments, and many of the volunteers and sponsors have been actively involved since the inaugural game in 2008.

After the game, participants were treated to a dinner, which Calarco said “gives players an opportunity to sit down, share a meal, and get to know each other.”

This year, a special component was added to the day’s festivities for the youths involved: an opportunity to train with a member of the New York Cosmos training staff. New York Cosmos training and development coach, and lifelong Long Island resident Steve Searing held an hour-long clinic with the youths, running drills with them and providing tips on how to improve their ball-handling skills. It was great to see how many of the youths who had never interacted before came together and bonded as a team as a result of the training.

Searing is proud of the grassroots efforts the New York Cosmos organization has undertaken to help create inclusive communities through youth outreach, while helping to promote soccer in America.

“Soccer is beautiful, it’s a beautiful game,” Searing said. “It’s a game that is shared around the world, and is growing more and more in the United States. Our goal is to help flourish these kids. With the right foundation, with the right youth training, we are making good players while making good people.”

The growth and reach of the tournament is essential for the continued efforts of the Village of Patchogue to continue building a more welcoming community for all, native and immigrant alike, according to Calarco. “This [tournament] is one small piece of the puzzle, for the Patchogue-Medford community,” he said. “We are going to embrace our differences, we are going to embrace the different people in our community, and different cultures, and use them as an asset. If you think about our nation as a whole, we’ve always had immigrant groups come, and each one has made an indelible mark on American culture, and it’s what we’ve done right [as a country].”

We look forward to our continued welcoming work with Legislator Calarco and the organizers of the Play For Peace tournament as we look ahead to the great event that will be held in August 2015!