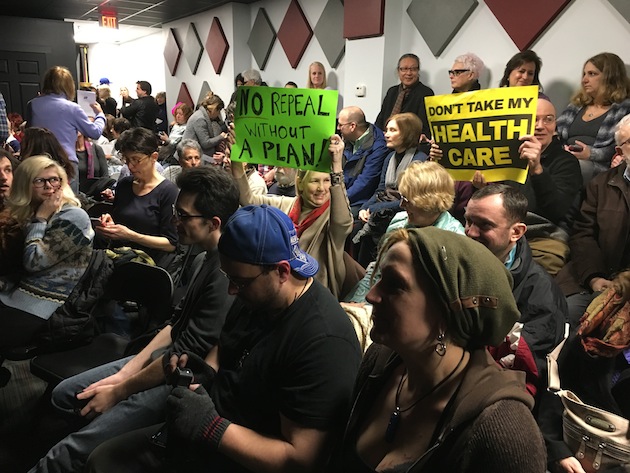 On March 4th, nearly 100 people met in the Port Jefferson Performing Arts Center to watch a satirical town hall, in which residents would ask questions and an actor playing a parody of Lee Zeldin answered using his previous statements. The satirical political performance was hosted by Project Free Knowledge, a Long Island-based group which advocates for the dissemination of political information to the public.

The event highlighted how many Suffolk County residents were frustrated that Congressman Lee Zeldin would not hold an in-person town hall to address the various concerns of his constituents. Congressman Zeldin did host a teleconference town hall in which a thousand constituents called in to listen, but the twelve questions asked were pre-screened and the event only lasted an hour. This performance was also an hour in length, and allowed residents to pose their questions while the actor read Lee Zeldin’s previous responses from other public events in response. There was also a second actor on stage which was referred to as “The People’s Candidate,” a figure meant to represent the popular opinions of New York District 1’s residents.

Project Free Knowledge invited Congressman Zeldin to attend the event, but said in their press release that “his office responded that the public event ‘is not beneficial to anyone.'” The group also met with the congressman to express their concerns about the lack of town hall and the lack of communication between the congressman and his constituents.

The group posted the entire performance on their Facebook, which you can watch below: