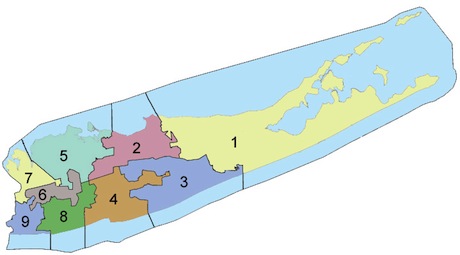 Not convinced that lawmakers are crafting district maps that suit their own ends? Just take a look at the jagged puzzle pieces that define the district boundaries on Long Island:

Lawmakers in Albany are reshaping New York State voting districts, and a proposed map could include an additional state senate seat in the Long Island/Queens area, the Albany Times Union reports.

A new seat on Long Island would aid Senate Republicans, who hold a slim majority in the senate. All nine state senators from Long Island are Republican, a point we underscored in June when they voted as a bloc against the right for LGBT New Yorkers to marry.

Despite pledges from state politicians to create an independent body to handle redistricting, the once-a-decade process is back in the hands of elected officials. As good government groups have pointed out, the redistricting process in New York is basically a way to keep incumbents in power, and in 2006, not a single incumbent lost a race.