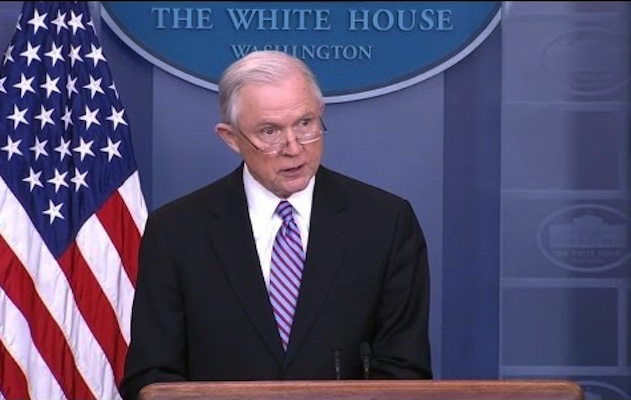 Attorney General Jeff Sessions threatened local law enforcement agencies around the country with the loss of funding needed to protect their communities unless they follow Donald Trump’s orders on immigration. The threat came at the press briefing on Monday, March 27th and was clearly aimed at the Trust Act, a measure the Maryland legislature is considering that would prohibit police from enforcing ICE immigration detention requests unless they are accompanied by a judicial order or a warrant.

The Attorney General has long been critical of states exercising their power to design criminal enforcement strategies to protect their residents from crime. He advocates for the federal government controlling state and local law enforcement’s policies in regards to immigration matters through the withholding of federal funding. Sessions and President Trump oppose what they describe as “sanctuary cities,” an indistinct term they apply to any state, city, or county that opposes their immigration policies. Even Nassau County was recently placed on a “sanctuary city” list by the Department of Homeland Security.

Many police departments around the country have limited their cooperation with ICE in one way or another. Collaboration restrictions range from not reporting undocumented immigrants who are the victims of crime to not cooperating with ICE detainers unless the immigrant is convicted of committing a crime or unless the detainer carries a judicial order with it.

ICE detainers are non-judicial requests that often do not state probable cause for the detention. Many police departments stopped honoring them because they resulted in more expenses for local law enforcement in order to hold the immigrants. These detainers also alienated local immigrant communities that came to see the police as adjuncts to ICE.

Threatening to withhold federal funds from places that refuse to act as ICE’s enforcers amounts to withholding tax dollars from the very cities and states that pay those taxes. It is this reduction in funding to police, and not the so-called “sanctuary” policies, that will make these places less safe.

New York Attorney General Eric T. Schneiderman challenged Sessions’ threat saying that, “Despite what Attorney General Sessions implied this afternoon, state and local governments and law enforcement have broad authority under the Constitution to not participate in federal immigration enforcement. As my office’s legal guidance makes clear, President Trump lacks the constitutional authority to broadly cut off funding to states and cities just because they have lawfully acted to protect immigrant families. Public safety depends on trust between law enforcement and those they bravely serve; yet, again and again, President Trump’s draconian policies only serve to undercut that trust.”