On November 8, 1987, a bomb explodes in the center of the Northern Ireland town of Enniskillen, killing twelve people. The target: a ceremony to remember soldiers who died during the First World War. Eleven of the dead are ordinary citizens – civilians – and one is a police officer.

Six years later in Warrington, England, two boys, a 3-year-old and a 12-year-old, are blown apart by a bomb planted in a trashcan in a busy shopping district.

The culprit in both attacks: The Provisional Irish Republican Army, commonly known as the IRA or the Provos, a terrorist organization committed until recently to bringing about a united Ireland by force of arms, no matter what the cost.

When most Irish people think of terrorism, regardless of their faith, the depraved acts of the IRA come to mind: the decapitated bodies of civilians, corpses of children, body parts strewn about the street.

That’s why it was so shocking to hear that Long Island Congressman Peter King – the current head of Homeland Security in the U.S. House of Representatives – has actively supported the organization in the past, and still won’t concede that these heinous crimes qualify as terrorism.

“The IRA had a far from perfect record, but it was not their policy to attack civilians,” King said in a clip recently featured on The Daily Show with Jon Stewart.

King’s long-standing support for the IRA would under any circumstances be revolting:  For years, the congressman has used his democratic mandate to defend enemies of freedom and democracy, terrorists who killed hundreds of civilians, made attempts on the lives of two British prime ministers, and set back by decades the economy of Northern Ireland.

In light of King’s ongoing hearings into the radicalization of US Muslims, however, rank hypocrisy can be added to the charges against him. At the same time as he targets American Muslims for helping to fuel terrorism, he defends a vicious terrorist group in another country.

In fairness to King’s constituents on Long Island, perhaps some people didn’t know the extent of the terrorism wrought by the IRA. But they should.

Over the course of The Troubles, as the period of violent conflict in Northern Ireland is known, the IRA murdered between 600 and 650 civilians in addition to approximately 1,200 members of the same British security forces that now fight alongside the United States in Iraq and Afghanistan. 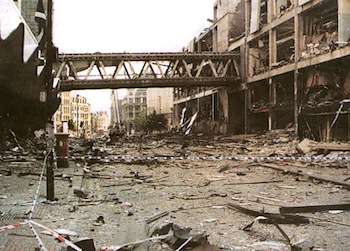 The aftermath of a 1996 IRA attack in Manchester, England.

It was a brutal, ruthless organization that caused misery and despair for thousands in Northern Ireland and mainland Britain for decades, and was reviled by the majority of people in Ireland, who felt the collective impact of IRA robberies, kidnappings, extortion, and killings. Needless to say, the group has long since been considered a terrorist organization by the United States, the United Kingdom and Ireland.

The IRA was able to carry out its terror campaign in part because of financial backing from sympathizers in the United States, the fervor of whom was undoubtedly whipped up by public demonstrations of support from Peter King and others. The Irish Northern Aid Committee (NORAID), the group’s de facto fundraising body in the US, raised countless dollars since the early 1970s that helped purchase arms and explosives for use in Northern Ireland and Britain.

That support, combined with shipments of arms from the now-embattled Libyan leader Muammar Gaddafi and from other global terrorist groups like ETA and the PLO, enabled the organization to continue with violence long after any popular support or toleration in Ireland had evaporated. The IRA didn’t officially end its armed campaign until 2005, seven years after the momentous Good Friday Agreement, which established that a united Ireland could come about only with the consent of the people living in the North and South.

But while the vast majority of Irish have long since disavowed the IRA, King still plays the part of apologist for the terrorists, eager to assert why one type of terrorism trumps another:

“I understand why people who are misinformed might see a parallel,” he said in defense of his radicalization hearings. “The fact is, the IRA never attacked the United States. And my loyalty is to the United States.”

The group did murder at least one American, however, as The Irish Voice’s Niall O’Dowd pointed out recently.

Perhaps if more US citizens had been among the hundreds of innocent civilians murdered by the IRA, the congressman would think differently. As it stands, though, his hypocritical view of terrorism prevails.

Patrick Mair was born in Dublin, Ireland.  He lives and works in New York City.